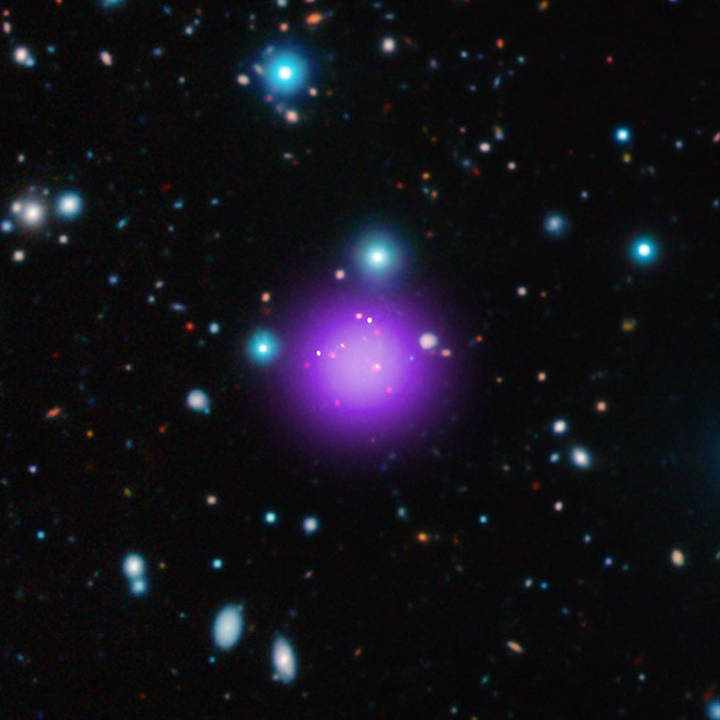 A new record for the most distant galaxy cluster has been set using NASA’s Chandra X-ray Observatory and other telescopes. This galaxy cluster may have been caught right after birth, a brief, but important stage of evolution never seen before.

The galaxy cluster is called CL J1001+0220 (CL J1001 for short) and is located about 11.1 billion light years from Earth. The discovery of this object pushes back the formation time of galaxy clusters – the largest structures in the Universe held together by gravity – by about 700 million years.

“This galaxy cluster isn’t just remarkable for its distance, it’s also going through an amazing growth spurt unlike any we’ve ever seen,” said Tao Wang of the French Alternative Energies and Atomic Energy Commission (CEA)  who led the study.

The core of CL J1001 contains eleven massive galaxies – nine of which are experiencing an impressive baby boom of stars. Specifically, stars are forming in the cluster’s core at a rate that is equivalent to over 3,000 Suns forming per year, a remarkably high value for a galaxy cluster, including those that are almost as distant, and therefore as young, as CL J1001.

The diffuse X-ray emission detected by Chandra and ESA’s XMM-Newton Observatory comes from a large amount of hot gas, one of the defining features of a true galaxy cluster.

“It appears that we have captured this galaxy cluster at a critical stage just as it has shifted from a loose collection of galaxies into a young, but fully formed galaxy cluster,” said co-author David Elbaz from CEA.

Previously, only these loose collections of galaxies, known as protoclusters, had been seen at greater distances than CL J1001.

The results suggest that elliptical galaxies in galaxy clusters like CL J1001 may form their stars during shorter and more violent outbursts than elliptical galaxies that are outside clusters. Also, this discovery suggests that much of the star formation in these galaxies happens after the galaxies fall onto the cluster, not before.

In comparing their results to computer simulations of the formation of clusters performed by other scientists, the team of astronomers found that CL J1001 has an unexpectedly high amount of mass in stars compared to the cluster’s total mass. This may show that the build-up of stars is more rapid in distant clusters than simulations imply, or it may show that clusters like CL J1001 are so rare that they are not found in today’s largest cosmological simulations.

“We think we’re going to learn a lot about the formation of clusters and the galaxies they contain by studying this object,” said co-author Alexis Finoguenov of the University of Helsinki in Finland, “and we’re going to be searching hard for other examples.”

A paper describing these results will appear in The Astrophysical Journal on August 30th and is available online. NASA's Marshall Space Flight Center in Huntsville, Alabama, manages the Chandra program for NASA's Science Mission Directorate in Washington. The Smithsonian Astrophysical Observatory in Cambridge, Massachusetts, controls Chandra's science and flight operations.