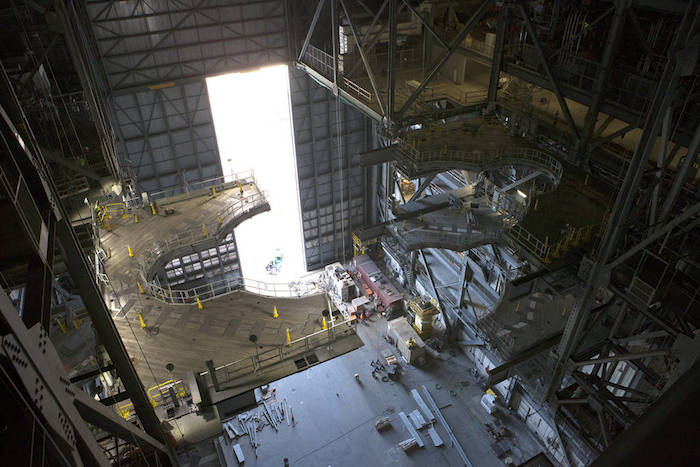 For the first time, one of the new work platforms in High Bay 3 inside the Vehicle Assembly Building (VAB) at NASA’s Kennedy Space Center in Florida was powered on. Lights illuminate one half of the J-level platforms for NASA’s Space Launch System on April 28 as the platform is extended. A preliminary test of both J platforms was completed to verify each platform’s motor, roller system and electrical connections. Photo credit: NASA/Kim Shiflett
NASA Kennedy Space Center in Florida is one power step closer to processing the agency’s Space Launch System (SLS), the most powerful rocket in the world, for its first flight, Exploration Mission 1 (EM-1), and NASA’s journey to Mars. During a preliminary test April 28, the two J-level work platforms installed on the north and south sides of Vehicle Assembly Building High Bay 3, where the SLS will be prepared for launch, were successfully activated to test their functionality and simulate how they will surround the massive rocket on the mobile launcher.
Mike Bolger, Ground Systems Development and Operations Program (GSDO) manager, stood on the walkway on the 16th floor, above the J-level platforms, as construction contractor Hensel Phelps operated the controls and began the test.
“It was an amazing sight to look down and watch as the platform smoothly extended out into the open air of High Bay 3,” Bolger said. “As each half of the J platforms slowly extended, I couldn’t help but think forward to the day when the SLS core stage and boosters will fill the void between the platform halves.”
The J-level work platforms are just one of 10 levels of platforms that will surround the SLS rocket and Orion spacecraft in the high bay. The platforms will extend and retract and will have the capability to be adjusted up or down as required to give engineers and technicians access to various areas of the giant rocket, twin solid rocket boosters, Orion and its launch abort system during processing and testing.
Each of the platform halves are about 62 feet wide and 38 feet long and weigh between 300,000 and 325,000 pounds. The J-level platforms are located about 112 feet above the VAB floor, or nearly 11 stories high, and will provide access to the SLS booster.
For this first test, initial power-up and platform extension took about 30 minutes. When the system is fully operational it will take less time, according to Jose Perez Morales, GSDO VAB Element senior project manager.
“The success of this test is another step in the realization of years of design and construction to prepare High Bay 3 for the Space Launch System rocket,” said Morales.
Two independent motors and chains, called drive chain rail activators, are located on the rails on either side of the platform. They were tested, along with the motors and tracks, to confirm they functioned properly. As each platform extended, it glided on four rollers positioned with two on each side of the platform — much like a kitchen drawer glides in and out. The movement of the mechanical articulated tray that moves with the platform also was tested.
“To the GSDO team, this is another positive indicator that we’re making progress and that we’re going to be ready when the flight hardware arrives for integration, test and launch from Kennedy Space Center,” Bolger said.
“We just accomplished a significant milestone for this project, and we are looking forward to the next ones,” said Gary Villa, NASA construction manager.
As additional platforms are installed in High Bay 3, they will undergo the same testing to ensure all of the platforms are ready for the first launch.
. 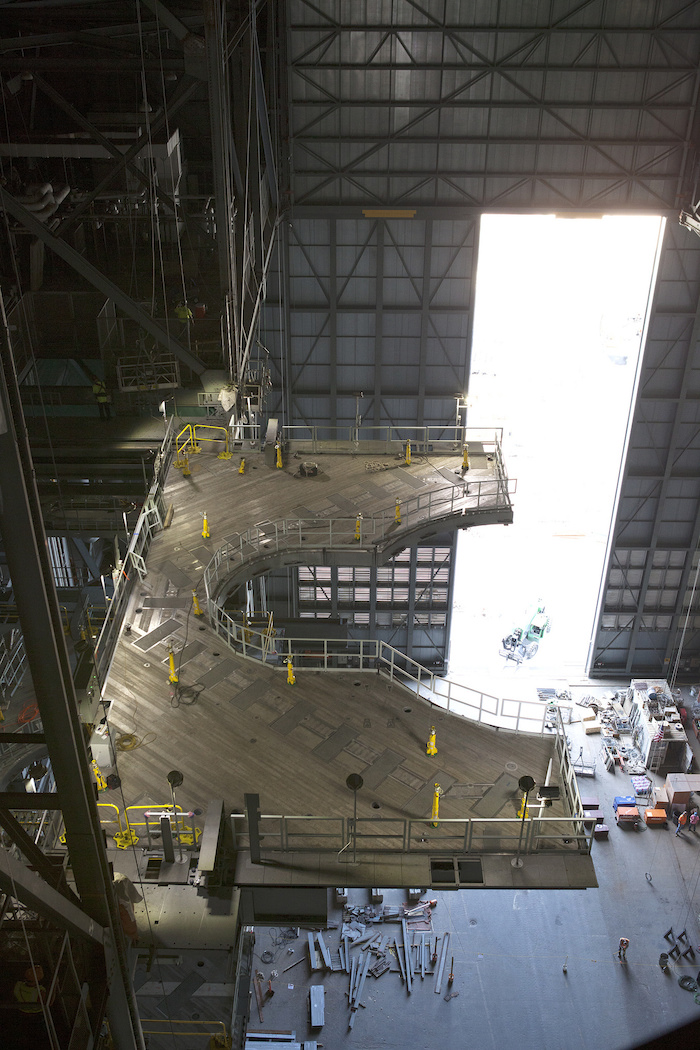