Rotational Movies of Pluto and Charon: It’s Show Time!
.
Today’s blog post is written by Constantine Tsang, a senior research scientist at the Southwest Research Institute (SwRI) in Boulder, Colorado. Con was a member of the New Horizons’ Geology, Geophysics Investigations (GGI) and Composition teams during the Pluto flyby, creating approach and photometric stereo movies of Pluto’s terrain.
It’s amazing that we’ve come such a long way in our exploration of the Pluto system, and it’s only been five months since the close flyby of New Horizons. From the exceptionally young ice-covered plain informally named Tombaugh Regio on Pluto to the deep canyons cut into Charon, the terrains we’re seeing are just amazing. Everyone, from the mission scientists to the general public, seems to be having a field day coming up with pet theories and comparisons with other places in our solar system to explain the alien Pluto system worlds we’re seeing.
. 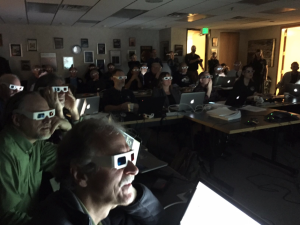 The New Horizons Science Team Meeting in Boulder, Colorado, in November 2015. Mission scientists enjoyed the fruits of their labor by viewing stereographic projections of geology 3-D terrain maps of Pluto and Charon. Credit: Constantine Tsang
Approaching the Pluto System
To put this into context, I’d like to take us back a few weeks just prior to the July 14 flyby, before we got the exquisitely detailed images we routinely downlink now. During that phase, we were getting longer range, low-resolution views of Pluto and Charon, and my job was to create approach movies showing New Horizons rushing up to meet the pair in space.
In workrooms at the Johns Hopkins Applied Physics Lab (JHUAPL) in Laurel, Maryland, I and many of the science team members had arrived for the flyby, and were working seven days a week to keep on top of the data flowing in. The majority of the science data being received at this time were in the form of panchromatic (black and white) images from the telescopic LORRI imager on New Horizons. These Optical Navigation images, or “OpNavs,” came in different flavors, in part based on their exposure times. These images are used to refine the approach trajectory of New Horizons and to search for hazards on approach. Sequencing these images together had the added benefit of allowing us to make movies of Charon and Pluto rotating on their axes and orbiting one another at closer and closer range.
The Pluto System in the Barycentric Reference Frame
The procedure I used to make these movies was not trivial, mind you. Each movie imager, or “frame,” from LORRI was, in fact, a stack of four separate images, taken at slightly different times. This allowed us to “sub-sample” Pluto’s (and eventually Charon’s) disk to get the best possible spatial resolution out of the LORRI telescope. This work was mainly done by science team member and image processing expert Tod Lauer at the National Astronomical Optical Observatories.
Because we wanted to get the best resolution out of the data, Tod and I enhanced the images using a technique called image deconvolution, which sharpens them. The practical problem with this was we didn’t sometimes know what features were real on Pluto and Charon (because we’ve never been there before!), and what were potentially introduced as artifacts by the deconvolution process. So we deconvolved the images separately, using multiple techniques, and then compared our results to see what features at the edge of resolution were common to differing image processing techniques—we knew we could trust those. Needless to say, I was gratified to see such features pop out from the LORRI images consistently.
Because Pluto was in a slightly different place in each frame, I then co-registered and centered Pluto to create a single movie Plutocentric frame that gave the approach movies the appearance of a motionless Pluto at the center of each movie. Every few days, another set of images was taken and I repeated the procedure. But I wasn’t quite done. To remove the barycentric “wobble” caused by Pluto and Charon tugging on each other, I then took each of the frames and co-registered them against a background star that appeared in the field of view of all the frames. Every 6.4 days, Charon would make a full rotation around Pluto, and I could compile a new rotation movie of Charon going around Pluto (see Figure 1). In these movies the features on Pluto would rotate, getting bigger in the field of view with each image, and we could finally begin to see the surface details that are so obvious now (see Figure 2).
On each movie frame, I also printed in ancillary data such as distance to Pluto and time to closest approach. I was humbled to be part of the process of giving the world its first look at the Pluto system up close.
As time went on, and we got data from the MVIC color camera aboard New Horizons, I could also overlay the color information on the monochromatic images to colorize the movie.
.

Figure 2: An approach movie I made comprised of LORRI images of a number of Charon rotations about Pluto, in the Plutocentric reference frame. The regions informally named Cthulhu Regio (dark region at the “bottom” of the Pluto image) and Tombaugh Regio (bright feature next to Cthulhu) could already be made out weeks before closest approach. Aside from one or two MVIC color frames, these images and movies were all we had before the July 14 flyby. Credit: NASA/JHUAPL/SwRI
.

Figure 2: Same as figure 1, but presented in the barycentric reference frame. Credit: NASA/JHUAPL/SwRI
Perspective
You may wonder why this process is at all relevant now, given the incredible high resolution images we got later. Well, here are a couple of reasons. First, the approach movies contain data on parts of Pluto and Charon that were not imaged at closest approach. These images will be used to get as much information out as possible about the Pluto system, its global geography, its surface properties, and potential temporal variations as we approached. Second, the barycentric movies are a great visualization of the two-body binary system and provide an invaluable teaching tool for educators and the general public. Finally, I think it just looks cool! It puts into perspective how we on New Horizons and NASA are always exploring, and how far we have come to explore the Pluto system.
Quelle: NASA
Raumfahrt
2358 Views
Created with page4