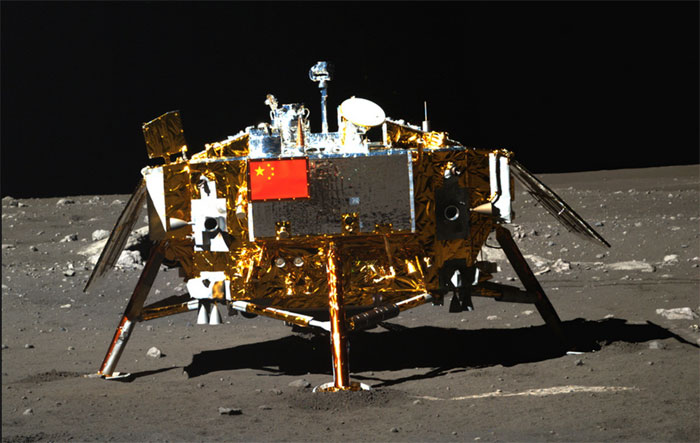 China Exclusive: China aims to go deeper into space
.
BEIJING, Oct. 15 As China's exploration of the moon progresses, its space experts have begun considering going deeper into the solar system - to Mars, asteroids and Jupiter - and a manned deep-space mission.
At a recent conference on deep-space exploration in Harbin, capital of northeast China's Heilongjiang Province, an official urged scientists and technologists to have a pioneering spirit.
"When exploring the unknown, we should not just follow others. China should be more creative," said Liu Jizhong, director of the lunar exploration program and space engineering center under the State Administration of Science, Technology and Industry for National Defense.
He pointed out that China still needs to tackle key problems, such as how to go into deep space at higher speeds; generating energy and power; and developing space robots that can work in the complicated space environment.
China should also strengthen international cooperation. "Exploring space is a great undertaking for the whole of humankind, and China should shoulder its responsibilities as a big country. Through international cooperation, we can learn from each other and jointly contribute," Liu said.
FAR SIDE OF THE MOON
Some Chinese scientists have suggested landing a probe on the far side of the moon, which would be unprecedented. Although China has not officially announced the plan, experts have begun to prepare the technologies needed.
Zhang Lihua, a researcher with China Spacesat Co., Ltd., said exploring the far side of the moon is of great scientific importance. Many countries have designed their own plans for such a mission.
It would require a relay satellite, which would be used for communication and navigation on the L2- or Lagrange point where the satellite could orbit within the combined gravitational pull of the Earth-moon system, said Zhang.
Lin Yilu, a senior engineer of the Shanghai Aerospace Systems Engineering Institute, said developing a lunar relay satellite is necessary for future lunar exploration, sending astronauts to the moon, as well as setting up a lunar base.
"If China expands the range of its lunar exploration, such as exploring the south and north poles and the far side of the moon, it needs a constellation of satellites covering different areas of the moon's surface," said Lin.
MANNED OR UNMANNED?
China has yet to start a manned deep-space exploration program, and experts hotly debate whether it's necessary to send humans into deep space, or just let robots do the job.
Guo Linli, a researcher with the China Academy of Space Technology (CAST), said humans will inevitably go deeper into space from near Earth orbit to the moon and then to Mars.
"Can robots replace humans to explore deep space? My view is that robots are suitable for repetitive, heavy loading, and fixed and known work. But it needs human wisdom to decide on unknown work that cannot be simulated in lab, such as surveying and choosing a site for a future lunar base," Guo said.
However, such ambitions come with a cost, and the biggest would be for the greatly increased scale of the spacecraft and rockets. It would need a heavy-lift launch vehicle with a capacity of more than 100 tonnes to send four astronauts to the moon, and environmental control and life support systems would be essential too, Guo said.
Compared with unmanned deep space exploration, manned missions would have fewer possible destinations and the cost and difficulties would be much greater. Currently, only the moon, Mars and asteroids are considered, Guo said.
Humans and robots will each have advantages, and will work together in exploring the deep space far into the future.
ASTEROID "ANTS"
In recent years, asteroids have become a focus of international space exploration. Scientists say asteroids hold materials that could unlock the secrets of the birth of the solar system and the origin of life.
Chinese experts are discussing the feasibility of sending a landing probe and retrieve samples from an asteroid.
But how could a probe land and move on an asteroid that might have an odd shape, almost zero gravity and complicated environment?
Zhang Wangjun, a senior CAST engineer, said wheeled robots like the U.S. Mars rover Curiosity have played an important role in space exploration. But robots with feet are more suitable for moving on hilly terrain with many obstacles.
"Robots with feet can avoid and cross obstacles more easily. We are researching two-feet, four-feet and six-feet robots. It seems that a six-feet robot has more advantages in mobility and flexibility in the complicated environment," Zhang said.
This finding echoes those in the United States, Europe and Japan, where researchers have developed robots imitating cockroaches, spiders and ants.
However, he said, current research only meets the industrial requirements. It is still a long way to go to adapting a robot to the environment of an asteroid.
Zhang has devised asteroid-probing robots like a pair of "ants" that can work independently or cooperatively.
Quelle: Xinhua
Raumfahrt
« Zum vorherigen Eintrag Zum nächsten Eintrag »
2429 Views
Created with page4