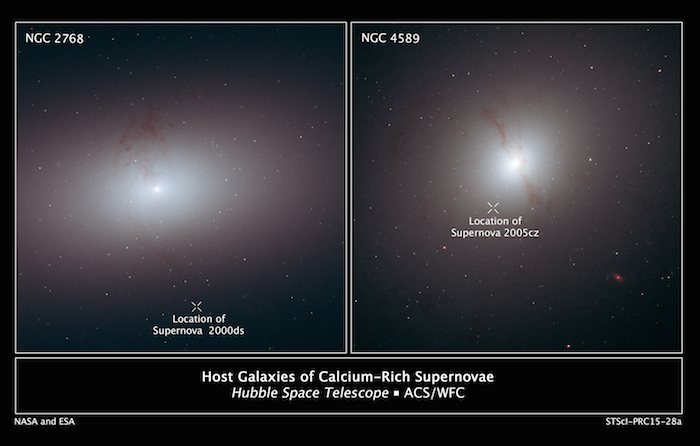 hese Hubble Space Telescope images show elliptical galaxies with dark, wispy dust lanes, the signature of a recent galaxy merger. The dust is the only relic of a smaller galaxy that was consumed by the larger elliptical galaxy.
The "X" in the images marks the location of supernova explosions that are associated with the galaxies. Each supernova may have been gravitationally kicked out of its host galaxy by a pair of central supermassive black holes. When two galaxies merge, so do their supermassive black holes. Astronomers suggest the supernovae were stars that were once part of double-star systems. These systems wandered too close to the binary black holes, which ejected them from their galaxies. Eventually, the stars in each system moved close enough together to trigger a supernova blast.
These outcast supernovae are located at various distances from their home galaxies. SN 2000ds (left) is at least 12,000 light-years from its galaxy, NGC 2768; SN 2005cz (right) is at least 7,000 light-years from its galaxy, NGC 4589. NGC 2768 resides 75 million light-years from Earth, and NGC 4589 is 108 million light-years away.
The supernovae are part of a census of 13 supernovae to determine why they detonated outside the cozy confines of galaxies. The study is based on archived images made by several telescopes, including Hubble.
Both galaxies were observed by Hubble's Advanced Camera for Surveys. The image of NGC 4589 was taken on Nov. 11, 2006, and the image of NGC 2768 on May 31, 2002.
Object Names: NGC 2768, NGC 4589
.
What happens when you find something in the wrong place at the wrong time? That's a question astronomers have been trying to answer after finding several exploding stars outside the cozy confines of galaxies, where most stars reside. These wayward supernovae also have puzzled astronomers because they exploded billions of years before their predicted detonations. Astronomers using archived observations from several telescopes, including the Hubble Space Telescope, have developed a theory for where these doomed stars come from and how they arrived at their current homes.
According to their scenario, the supernovae were once stars in double-star systems that wandered too close to twin supermassive black holes at the core of a merging galaxy. The black-hole duo gravitationally catapulted the stars out of their home galaxies. The interaction pulled the stars closer together, which accelerated the merger between each pair. Eventually, the stars moved close enough to trigger a supernova blast.
Quelle: NASA
Astronomie
2328 Views
Created with page4