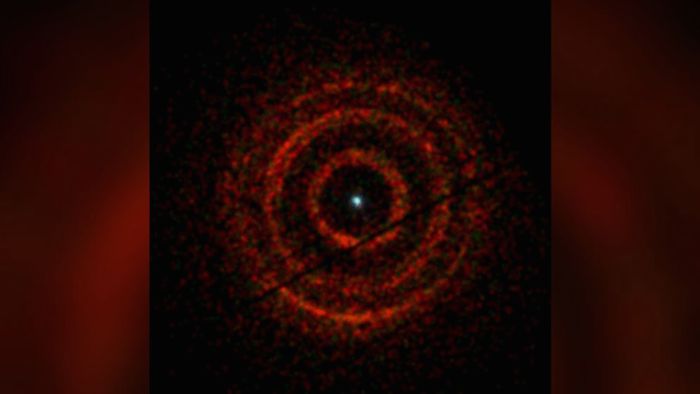 Rings of X-ray light centered on V404 Cygni, a binary system containing an erupting black hole. NASA
-
An eruption from a distant black hole has allowed NASA's Swift Satellite to view a light show of concentric circles the space agency said are among "the best dust-scattered X-ray ring images ever seen" from a black hole outburst.
V404 Cygni is located approximately 8,000 light-years from Earth and has a mutual orbit with a companion sun-like star. The black hole has a spectacular eruption once every couple of decades, according to NASA. Its last outburst was in 1989.
Using an X-Ray telescope on board Swift, a team led by researcher Andrew Beardmore at the University of Leicester in the United Kingdom imaged the system and saw concentric rings appearing about nearly half the diameter of our full moon.
By combing the images, researchers were also able to make a movie showing the apparent "echo" effect the rings. Studying their behavior allows astronomers to better understand where interstellar dust in the rings travels.
"The flexible planning of Swift observations has given us the best dust-scattered X-ray ring images ever seen," Beardmore said. "With these observations we can make a detailed study of the normally invisible interstellar dust in the direction of this black hole."
According to NASA, multiple rings are visible because there are dust layers between 4,000 and 7,000 light years away from Earth.
While some light had a direct path to Swift, other rays must travel a longer distance, meaning that light will hit Swift later. The time lag between both instances then creates the echo effect, according to NASA, forming the spectacular expanding bull's-eye rings Swift photographed.
Quelle: abc-News
« Zum vorherigen Eintrag Zum nächsten Eintrag »
2438 Views
Created with page4