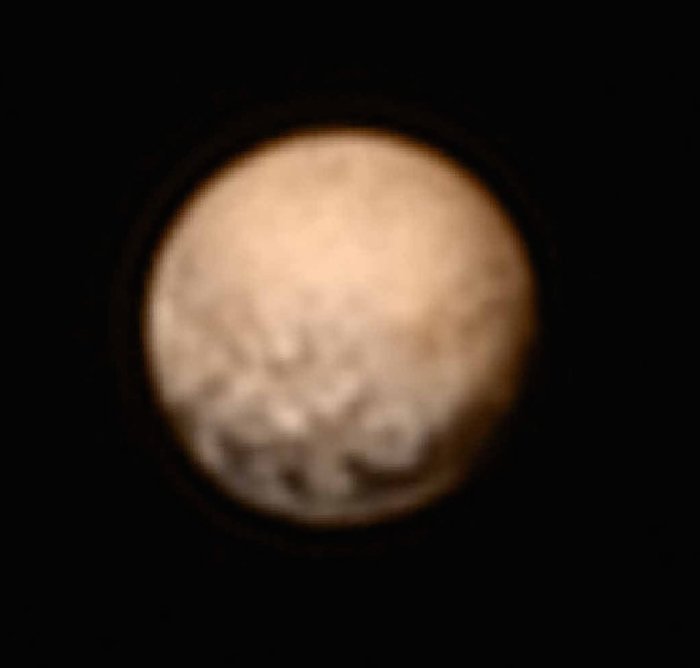 Pluto in color, captured on July 3 by New Horizons' Long Range Reconnaissance Imager with data from the Ralph Instrument. Credit NASA/Johns Hopkins University Applied Physics Laboratory/Southwest Research Institute
.
This image of Pluto, released Monday afternoon by NASA, is the crispest ever taken. But it is nothing compared with what you will see in a week, when NASA's New Horizons spacecraft buzzes just 7,800 miles above Pluto's surface.
This visit will bring the dwarf planet into focus for the first time, illuminating mysterious dark regions on its surface and possibly erupting ice volcanoes. By photographing a surface from multiple vantage points, scientists will be able to construct a topographic map of the former ninth planet.
Those working on this mission have been waiting many years for a close-up. The fly-by, at 7:50 a.m. Eastern time on July 14, comes 14 years after the initial proposal and nine and a half years after New Horizons left Earth. The spacecraft will fly through the Pluto system at about 10 miles per second or around 31,000 miles per hour.
Quelle: The New York Times
-
Update: 8.07.2015
.

The team behind NASA's New Horizons mission has drawn up its proposed list of names for yet-to-be-discovered geological features on Pluto and its moons — and the lineup ranges from Gilgamesh (the mythical hero of the Mesopotamian epic of the 22nd century B.C.) to Mr. Spock (the fictional Vulcan from the 23rd century A.D.).
There's plenty on the list to please "Star Trek" fans as well as those who love "Star Wars," the writings of J.R.R. Tolkien and H.P. Lovecraft, and "The Wizard of Oz." The proposed names also evoke other sci-fi epics, real-life and fictional explorers, the biggest names in space exploration, and myths and legends from around the world.
Input for the list came from an "OurPluto" online survey that drew about 60,000 filled-in ballots and 15,000 write-in candidates, said Mark Showalter, a planetary scientist at the SETI Institute who organized the naming campaign.
Showalter and the New Horizons team expect they'll have to give names to a legion of geographical discoveries when the probe flies past Pluto and its moons on July 14. That's why Showalter came up with the "OurPluto" campaign, which was modeled after an earlier exercise to name two Plutonian moons he helped discover.
As was the case for those two moons, Styx and Kerberos, it's up to the discoverers to propose names for craters, mountains and other geographical features. But then it's up to the International Astronomical Union to approve them. In this case, Showalter and his colleagues are seeking "pre-approval" for the names on the newly announced list.
"It's up to the IAU, but since the public was so invested in the process, we thought it was appropriate to let the public know what we're proposing," Showalter told NBC News.
Here's a sampling, but for the full list, you'll want to check out the proposal that's posted online.
Features on Pluto: The themes include space missions and spacecraft (Columbia and Challenger, Sputnik and Soyuz), scientists and engineers (Tombaugh, Lowell and Oort), historic explorers (Norgay, Hillary and Baré), underworld beings and locales (Cthulhu, Balrog and Pandemonium), and travelers to the underworld (Heracles, Virgil and Beatrice).
Features on Charon, Pluto's largest moon: Fictional explorers and travelers (Kirk, Spock, Uhura, Skywalker, Leia, Vader, Alice, Dorothy), fictional origins and destinations (Vulcan, Mordor, Tatooine), fictional vessels (Serenity, Tardis, Nostromo, Galactica), and authors, artists and directors who touched on exploration (Douglas Adams, Arthur C. Clarke, Madeleine L'Engle).
Features on the moon Styx: River gods (Ethiopia's Eqqo, Egypt's Hapi, Zaire's Mbongo).
Features on the moon Nix: Deities of the night (Chandra, a Hindu moon god; Bodach, a Scottish goblin; Metsaka, a moon goddess of Mexico's Huichol people).
Features on the moon Kerberos: Dogs from literature, history and mythology (Laika and Toto).
Features on the moon Hydra: Legendary serpents and dragons (Jabberwock, Smaug and Falkor).
Showalter said the write-ins provided "some fantastic ideas that we are so grateful for." For example, he was embarrassed to learn that Sputnik had been left off the initial list of spacecraft names. "Luckily, the public had our back and fixed that egregious oversight," he said.
For now, there's no requirement to use a particular name for a particular type of feature. But if Showalter were given the final say, the name of Clyde Tombaugh, Pluto's discoverer, would be attached to the dwarf planet's highest mountain. And the names of underworld monsters — such as Lovecraft's Cthulhu and Tolkien's Balrog — would go on the deepest craters.
"It's a perfect theme for craters, because craters are like holes in the ground," Showalter said.
He said the New Horizons team might have to start out giving names to geographical features on a provisional basis, pending IAU approval. Still more names could be put in the pipeline for later, but Showalter suspects that the folks in charge of the IAU name approval process will have their hands full with the more than 100 names on the initial list.
"I'm sure this is the largest single proposal they've ever seen," Showalter said.
-

LAS CRUCES, N.M. — It's not surprising that the approach of NASA's New Horizons spacecraft to Pluto is one of the best things that ever happened to the family of Clyde Tombaugh, who discovered the dwarf planet back in 1930.
But you might be surprised to hear what else is on his daughter's list of memorable moments: It's the day in 2006 when the International Astronomical Union voted to take Pluto off the list of planets.
"If Pluto had not been demoted, I would probably not be this involved in it," Annette Tombaugh-Sitze, 74, told NBC News. "I would never have gotten involved with the Great Planet Debate. I would never have met Neil Tyson. I would never have done the 'NOVA' show. I would never have met so many wonderful people. And that has been my journey."
Since even before the launch of New Horizons nine years ago, the Tombaugh family's emotional highs and lows have paralleled Pluto's fortunes. Right now, they're on a 3-billion-mile high: The piano-sized New Horizons spacecraft is due to buzz within 8,000 miles of the icy world's surface on July 14. The eyes of the world are on Pluto, and that means they're also on Annette and her brother, Alden Tombaugh.
Annette and Alden are now the senior members of the Tombaugh clan: Clyde died in 1997 in Las Cruces, when the debate about Pluto's planethood was still percolating. His wife, Patsy, lived to see New Horizons launched in 2006 — and see Pluto demoted seven months later.
"I'm not heartbroken," Patsy told reporters at the time. "I'm just shook up." She passed away in 2012 at the age of 99, when New Horizons was flying between the orbits of Uranus and Neptune.
. 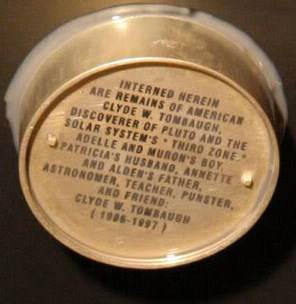 A canister mounted on the New Horizons spacecraft contains a bit of Clyde Tombaugh's ashes, and celebrates his role as the discoverer of Pluto. JHUAPL
.
There's a little bit of Clyde Tombaugh on the New Horizons spacecraft. Literally. A smidgen of his cremated remains was placed there before launch, beneath a medallion commemorating his role as "the discoverer of Pluto and the solar system's 'third zone.'"
"My dad would have been thrilled," Alden Tombaugh, 70, told NBC News. "He always said that if he had the chance, he wanted to visit the planets. And a little part of him is going to get to do that."
Both children are living in Las Cruces, where Clyde helped establish New Mexico State University's astronomy program as well as the local Unitarian Universalist church. Annette has spent most of her life as a teacher. Alden had a 37-year career in banking and is now helping his wife with an educational diagnostics business.
Alden also has a side interest in race cars. But how about science? "That type of work never interested me. I think I was too lazy," he joked.
Even though the children didn't follow their father into the field of planetary science, they're both well-versed in the case for keeping Pluto in the planetary fold. Their criticism of the IAU focuses on the part of the definition for planethood that talks about a planet having to "clear the neighborhood around its orbit" — a concept that some professional astronomers have also questioned.
"The problem as I see it is, as we go farther and farther out, and find objects orbiting other stars, what do we call them?" Alden said. "Well, they decided to call them planets, but we have no idea if they are, based on the new definition."
Looking beyond the Pluto connection, both children say one of the things they remember most about their father was his persistence. That trait is what helped Clyde sort through hundreds of photographic plates at the Lowell Observatory back in 1930 — looking for, and ultimately finding, the elusive signature of a new world on the solar system's edge.
"One of the lessons learned from my father's experience is that a dedication to something you enjoy can lead to adventures for all mankind," Alden said.
Now Clyde's children are showing the same kind of dedication to Pluto's cause: New Horizons is once again giving Pluto, and the Tombaughs, their day in the sun.
"This refocuses the interest in a positive fashion," Annette said. "I thought the status would always be, 'Oh, forget Pluto.' ... But as we go through this event, it's going to make people aware that there is a whole other part of the solar system that is highly populated with many more bodies than the original eight, or nine, or 10.
"Getting close to Pluto is going to widen our view of not just our solar system, but the universe."
Quelle: NBC-News
---
Pluto fly-by: a graphical guide to the historic mission
New Horizons mission is set to speed past an ice world at the fringes of the Solar System.
On 14 July, after a journey of nine and a half years and some 5 billion kilometres, NASA’s New Horizons spacecraft will visit the frigid frontier of the Solar System: Pluto. It will be a fast and furious meeting — the spacecraft will whiz past at nearly 50,000 kilometres per hour, collecting photographs and scientific data on Pluto’s surface, atmosphere and environment during the 24-hour event. No mission has ever visited Pluto or any of the other ice worlds that make up the Kuiper belt, the swarm of small and frosty bodies that orbit mostly beyond Neptune. With its huge moon Charon, Pluto also constitutes the Solar System’s only known binary system.
. 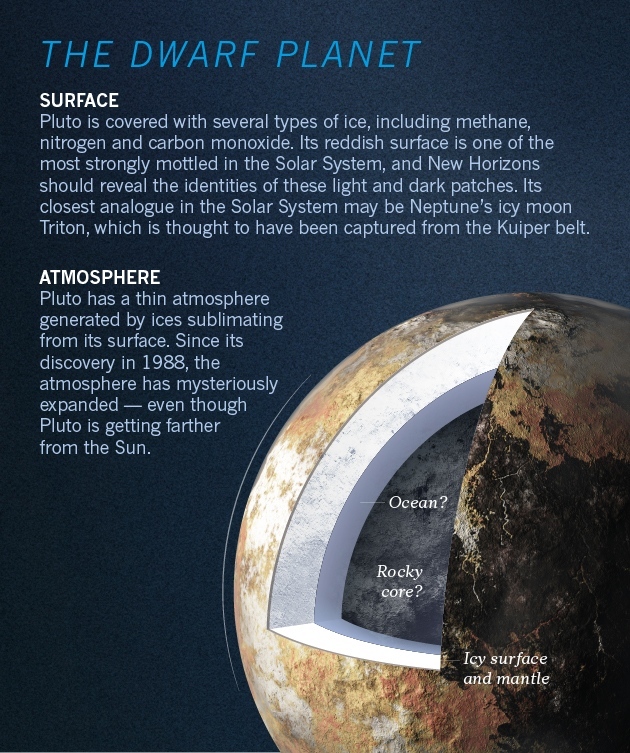 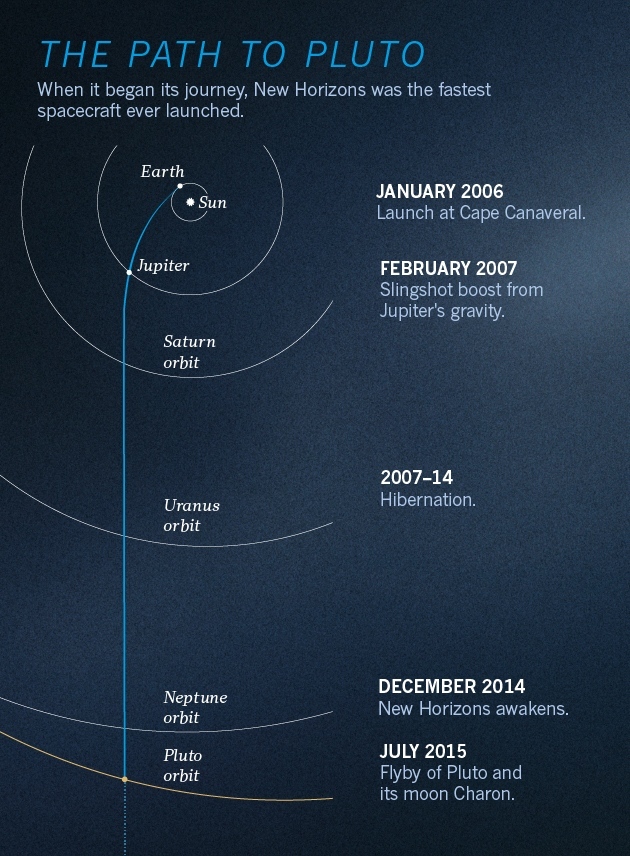