The Chinese opened their 2015 campaign with the launch of a Long March 3C with the first of a new generation of navigation satellites. The launch – of what is believed to be a satellite called Beidou-3 M1 – took place at 13:52 UTC from the Xichang Satellite Launch Center, utilizing the debut use of the new Expedition-1 (Yuanzheng-1) upper stage.
Chinese Launch:
Monday’s launch involved a new series of satellites that is expected to mark an advancement in the completion of its Beidou Phase III program several years ahead of schedule, by as soon as 2017, rather than 2020.
However, the launch initially received a blackout in the Chinese media, with lift-off only confirmed by local observers. It took several hours – once the spacecraft was successfully deployed – for the Chinese media to acknowledge the launch.
The Beidou Phase III system includes the migration of its civil Beidou 1 or B1 signal from 1561.098 MHz to a frequency centered at 1575.42 MHz – the same as the GPS L1 and Galileo E1 civil signals – and its transformation from a quadrature phase shift keying (QPSK) modulation to a multiplexed binary offset carrier (MBOC) modulation similar to the future GPS L1C and Galileo’s E1. 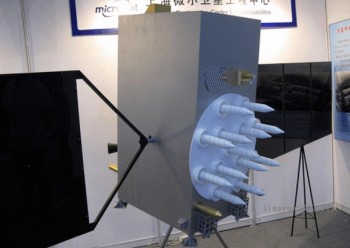 The current (Phase II) B1 open service signal uses QPSK modulation with 4.092 megahertz bandwidth centered at 1561.098 MHz.
The current Beidou constellation of geostationary (GEO) – five inclined geosynchronous orbit (IGSO), and four middle Earth orbiting (MEO) – spacecraft are transmitting open and authorized signals at B2 (1207.14 MHz) and an authorized service at B3 (1268.52 MHz).
Real-time, stand-alone Beidou horizontal positioning accuracy was classed as better than 6 meters (95 percent) and with a vertical accuracy better than 10 meters (95 percent).
The Compass Navigation Satellite System (CNSS) is China’s satellite navigation system, approved by the Chinese government in 2004, capable of providing continuous, real-time passive 3D geo-spatial positioning and speed measurement.
The long-term goal is to develop a global navigation satellite network similar to the GPS and GLONASS by 2020 eventually consisting a constellation of 35 vehicles, including 27 MEO (21,500 km orbits) satellites, three IGSO satellites (inclined at 55 degrees) and five GSO satellites.
The system will be dual use, based on a civilian service that will provide an accuracy of 10 meters in the user position, 0.2 m/s on the user velocity and 50 nanoseconds in time accuracy; and the military and authorized user’s service, providing higher accuracies. The first phase of the project will involve coverage of the Chinese territory. However, the future Compass constellation will cover the entire globe.
The new satellite uses a new bus that feature a phased array antenna for navigation signals and a laser retroreflector. Launch mass is about 800 kg and the satellites have an operational lifespan of 5 years.
Launch vehicle and launch site:
This mission was also the first flight of the Long March-3C/YZ-1 (Chang Zheng-3C/YZ-1) version of the Long March-3C.
The Long March-3C was developed to fill the gap between the Long March-3A and the Long March-3B, having a payload capacity of 3,800 kg for GTO or 9,100 kg for LEO. This is a three stage launch vehicle identical to the CZ-3B but only using two of the strap-on boosters on its first stage.
CZ-3C provides two types of fairing and two kinds of fairing encapsulating process and four different payload interfaces, which is the same as CZ-3B launch vehicle. The various fairing and interface adapter and the suitable launch capacity make CZ-3C a good choice for the user to choose the launch service.
The development of the CZ-3C started in February 1999. The rocket has a liftoff mass of 345,000 kg, sporting structure functions to withstand the various internal and external loads on the launch vehicle during transportation, hoisting and flight.
The rocket structure also combines all sub-systems together and is composed of two strap-on boosters, a first stage, a second stage, a third stage and payload fairing.
The first two stages as well as the two strap-on boosters use hypergolic (N2O4/UDMH) fuel while the third stage uses cryogenic (LOX/LH2) fuel. The total length of the CZ-3C is 54.838 meters, with a diameter of 3.35 meters on the core stage and 3.00 meters on the third stage.
On the first stage, the CZ-3C uses a DaFY6-2 engine with a 2961.6 kN thrust and a specific impulse of 2556.2 Ns/kg. The first stage diameter is 3.35 m and the stage length is 26.972 m.
Each strap-on booster is equipped with a DaFY5-1 engine with a 704.4 kN thrust and a specific impulse of 2556.2 Ns/kg. The strap-on booster diameter is 2.25 m and the strap-on booster length is 15.326 m.
The second stage is equipped with a DaFY20-1 main engine (742 kN / 2922.57 Ns/kg) and four DaFY21-1 vernier engines (11.8 kN / 2910.5 Ns/kg each). The second stage diameter is 3.35 m and the stage length is 9.470 m.
The third stage is equipped with two YF-75 engines developing 78.5 kN each and with a specific impulse of 4312 Ns/kg. The fairing diameter of the CZ-3C is 4.00 meters and has a length of 9.56 meters.
The Yuanzheng-1 (“Expedition-1″) uses a small thrust 6.5 kN engine burning UDMH/N2O4 with specific impulse at 3092 m/s. The upper stage should be able to conduct two burns and has a 6.5 hour lifetime.
It will be adapted for use on the CZ-3A/B/C series mainly for direct MEO/GEO insertion missions (mostly for the navigation satellites of the Beidou GNSS).
The Xichang Satellite Launch Centre is situated in the Sichuan Province, south-western China and is the country’s launch site for geosynchronous orbital launches.
Equipped with two launch pads (LC2 and LC3), the centre has a dedicated railway and highway lead directly to the launch site.
The Command and Control Centre is located seven kilometers south-west of the launch pad, providing flight and safety control during launch rehearsal and launch.
The CZ-3B launch pad is located at 28.25 deg. N – 102.02 deg. E and at an elevation of 1,825 meters.
Other facilities on the Xichang Satellite Launch Centre are the Launch Control Centre, propellant fuelling systems, communications systems for launch command, telephone and data communications for users, and support equipment for meteorological monitoring and forecasting.
The first launch from Xichang took place at 12:25UTC on January 29, 1984, when the Chang Zheng-3 (CZ3-1) was launched the Shiyan Weixing (14670 1984-008A) communications satellite into orbit.
Quelle: NS
.
A Long March-3C rocket carrying a new-generation satellite for the BeiDou Navigation Satellite System (BDS) is ready for launch at the Xichang Satellite Launch Center in the southwest China's Sichuan Province, March 30 2015. China launched a new-generation satellite into space for its indigenous global navigation and positioning network at 9:52 p.m. Beijing Time Monday. It is the 17th satellite for the BDS. The launch marked the beginning of expanding the regional BDS to global coverage.
. 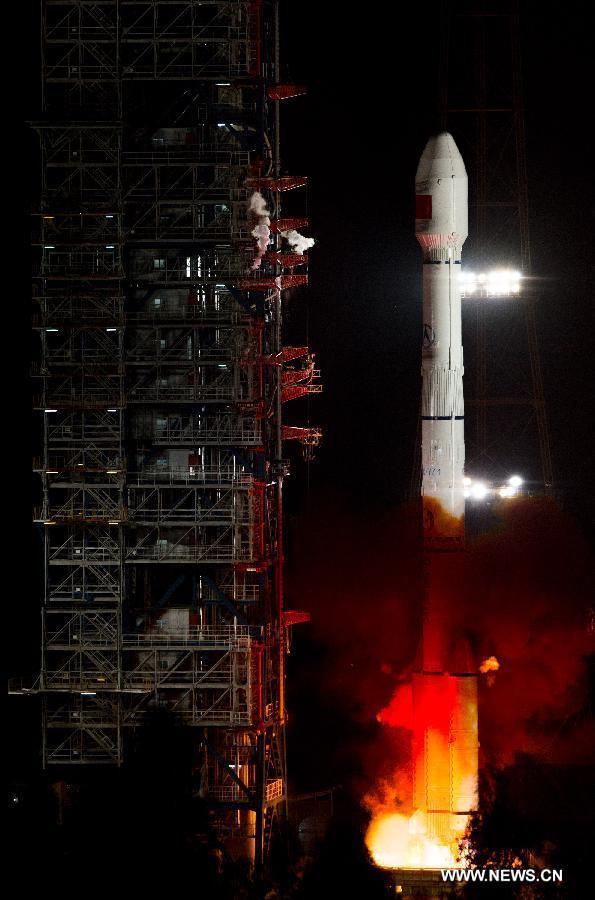 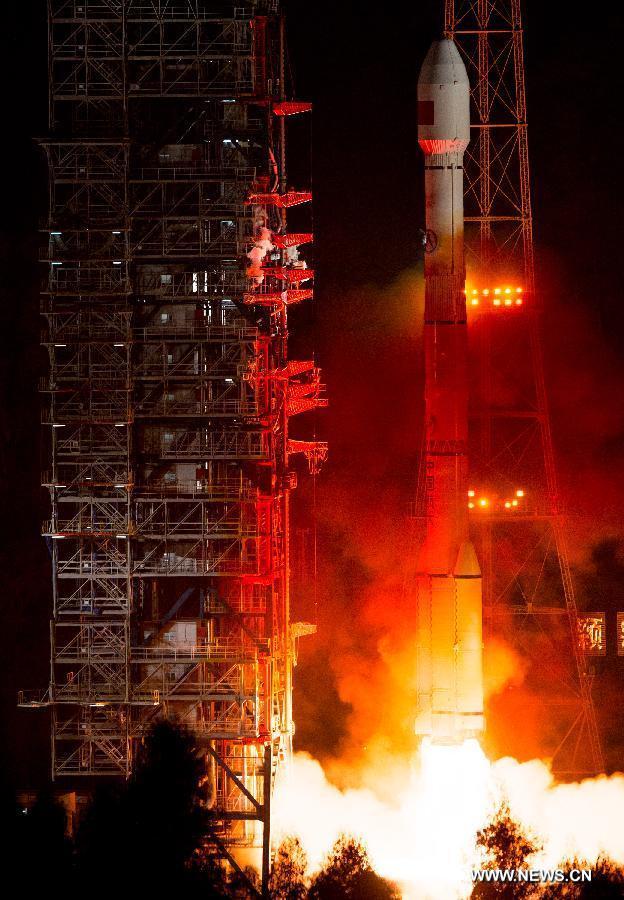 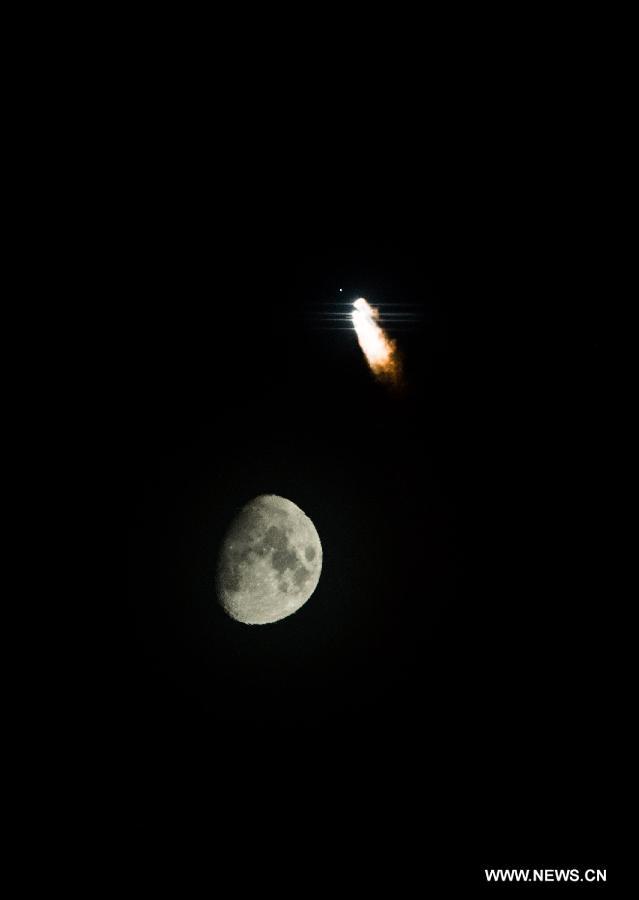 China launched a new-generation satellite into space for its indigenous global navigation and positioning network at 9:52 p.m. Beijing Time Monday.
Launched from the Xichang Satellite Launch Center in the southwestern province of Sichuan, the satellite was boosted by a Long March-3C carrier rocket developed by the China Aerospace Science and Technology Corporation.
It is the 17th satellite for the BeiDou Navigation Satellite System (BDS). The launch marked the beginning of expanding the regional BDS to global coverage.
The latest satellite will be tasked with testing a new type of navigation signaling and inter-satellite links, providing a basis to start building the global network, according to the center.
An independent aircraft was installed on the carrier rocket, marking the first time China has used such technology in blasting off spacecraft into medium to high orbit.
The independent aircraft, dubbed a "shuttle bus in space", can send one or more spacecraft into different orbits in space.
China launched the first BDS satellite in 2000. The BDS began providing positioning, navigation, timing and short message services to civilian users in China and surrounding areas in the Asia-Pacific in December 2012.
The system has been gradually put into use in extended sectors including transportation, weather forecasting, the marine fishing industry, forestry and telecommunications.
The new satellite was developed by the Shanghai Engineering Center for Microsatellites, a non-profit organization established by the Chinese Academy of Sciences and the Shanghai Municipal Government.
Quelle: Xinhua
Raumfahrt
« Zum vorherigen Eintrag Zum nächsten Eintrag »
2723 Views
Created with page4