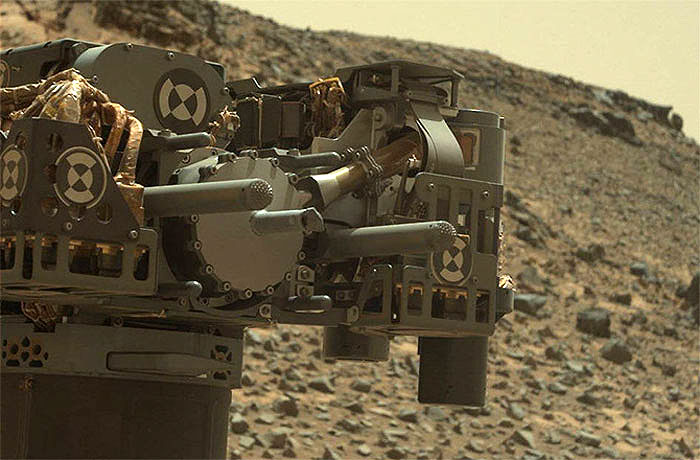 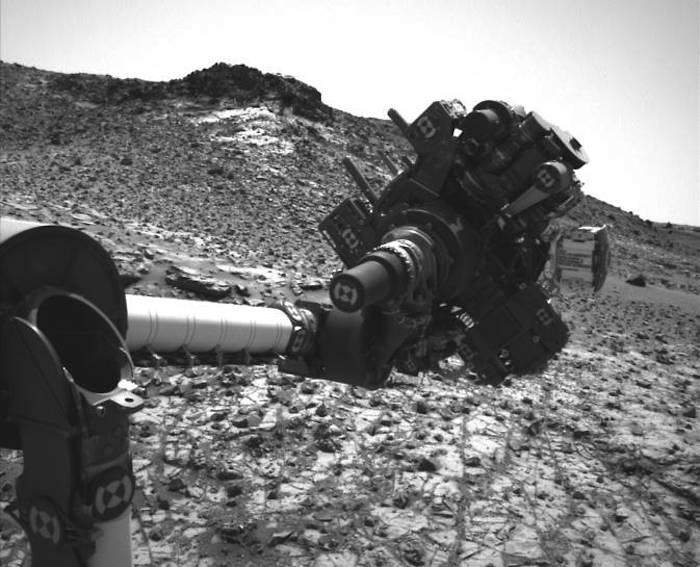 This March 4, 2015, image from the Navcam on NASA's Curiosity Mars rover shows the position in which the rover held its arm for several days after a transient short circuit triggered onboard fault-protection programming to halt arm activities on Feb. 27.
Image Credit: NASA/JPL-Caltech/MSSS
.
Mission Status Report
Managers of NASA's Curiosity Mars rover mission expect to approve resumption of rover arm movements as early as next week while continuing analysis of what appears to be an intermittent short circuit in the drill.
A fluctuation in current on Feb. 27 triggered a fault-protection response that immediately halted action by the rover during the mission's 911th Martian day, or sol. Since then, the rover team has avoided driving Curiosity or moving the rover's arm, while engineers have focused on diagnostic tests. Science observations with instruments on the rover's mast have continued, along with environmental monitoring by its weather station.
"Diagnostic testing this week has been productive in narrowing the possible sources of the transient short circuit," said Curiosity Project Manager Jim Erickson of NASA's Jet Propulsion Laboratory, Pasadena, California. "The most likely cause is an intermittent short in the percussion mechanism of the drill. After further analysis to confirm that diagnosis, we will be analyzing how to adjust for that in future drilling."
The sample-collection drill on Curiosity's robotic arm uses both rotation and hammering, or percussion, to penetrate into Martian rocks and collect pulverized rock material for delivery to analytical instruments inside the rover.
The short on Sol 911 occurred while the rover was transferring rock-powder sample from the grooves of the drill into a mechanism that sieves and portions the powder. The percussion action was in use, to shake the powder loose from the drill.
Engineers received results Thursday, March 5, from a test on Curiosity that similarly used the drill's percussion action. During the third out of 180 up-and-down repeats of the action, an apparent short circuit occurred for less than one one-hundredth of a second.  Though small and fleeting, it would have been enough to trigger the fault protection that was active on Sol 911 under the parameters that were in place then.
The rover team plans further testing to characterize the intermittent short before the arm is moved from its present position, in case the short does not appear when the orientation is different.
After those tests, the team expects to finish processing the sample powder that the arm currently holds and then to deliver portions of the sample to onboard laboratory instruments. Next, Curiosity will resume climbing Mount Sharp.
NASA's Mars Science Laboratory Project is using Curiosity to assess ancient habitable environments and major changes in Martian environmental conditions.  JPL, a division of the California Institute of Technology in Pasadena, built the rover and manages the project for NASA's Science Mission Directorate in Washington.  For more information about Curiosity,
Quelle: NASA
Raumfahrt
« Zum vorherigen Eintrag Zum nächsten Eintrag »
3013 Views
Created with page4