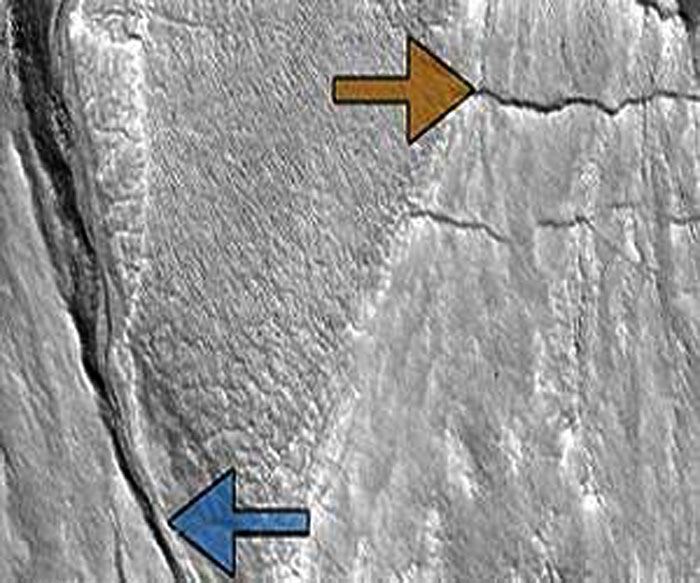 Sharp-featured, relatively recent gullies (blue arrows) and degraded older gullies (gold) in the same location on the surface of Mars suggest multiple episodes of liquid water flow, consistent with cyclical climate change on the Red Planet. Image courtesy NASA HiRISE.
-
Geologists from Brown University have found new evidence that glacier-like ice deposits advanced and retreated multiple times in the midlatitude regions of Mars in the relatively recent past.
For the study, in press in the journal Icarus, the researchers looked at hundreds of gully-like features found on the walls of impact craters throughout the Martian midlatitudes. They conclude that many of those gullies were formed by meltwater from icy deposits, which are known to have covered the Martian midlatitudes within the last 2 million years.
The study also turned up evidence of multiple gully-forming events, suggesting that these ice deposits waxed and waned several times over the last several million years - relatively recently in Mars' 4.5-billion year history.
"These recent climate cycles have been predicted by computer models, but have not been documented with widespread geological evidence until now," said Jay Dickson, a researcher at Brown and the study's lead author.
"This research shows that gullies have been episodic across the entire southern hemisphere, a distribution that is required for this to be a signal of global climate change."
Wobbly axis
At present, most of the water ice on Mars is concentrated at its poles, but there's a wealth of evidence that it wasn't always that way. In 2003, research led by Brown geologists James Head and Jack Mustard showed that the midlatitude regions of Mars are draped to varying degrees by layers of ice-rich soil and dust.
Landforms in and around the deposits, termed the "latitude-dependent mantle," look remarkably similar to glacial terrains found here on Earth. The deposits suggest the presence of thin glacier-like ice deposits sometime between 400,000 and 2 million years ago.
The researchers concluded that this recent Martian ice age was likely linked to the planet's wobbly rotation around its axis. Currently, the angle of Mars' axis - its obliquity - is about 25 degrees, fairly close to that of Earth. But because Mars lacks a large moon to stabilize its rotation, its recent obliquity oscillates between around 15 degrees and as much as 35 degrees. (Earth's obliquity, in contrast, varies only 2.4 degrees).
Computer models predict that when the obliquity of Mars exceeds 30 degrees, increased sunlight at the poles causes water in the ice caps to be freed into the atmosphere. That water is transported and deposited closer to the equator in the form of glacial snow and ice.
Mars is known to have crossed the 30-degree threshold in obliquity several times during the last 20 million years. So if obliquity drives ice ages, there should be evidence for multiple glacial periods in the Martian midlatitudes, and that's what the researchers were looking for in this latest study.
Gullies old and new
The researchers looked at detailed images taken by NASA's High Resolution Imaging Science Experiment (HiRISE) of 479 gullies in the midlatitudes of Mars' southern hemisphere. The gully systems, which form on steep crater walls, consist of an alcove at the top from which sediment is excavated, a channel through which material is carried, and a delta-like fan at the bottom where material is deposited.
The survey showed gully systems in various states of erosion and degradation. In some places, older gully fans, eroded over many years by the elements, had been crosscut by new gully fan systems. That suggests at least two gully-carving events. In other examples, gully fans were clearly visible, but the alcoves and channels that supplied them had disappeared, covered by a new layer of ice-rich soil. That too suggests multiple periods of glacial deposition.
"We show solid evidence of at least two periods of emplacement of the latitude-dependent mantle," said Head, an author on the new paper. "That's consistent with the idea of cyclical ice ages on Mars related to its obliquity."
The work also bolsters the idea the many of gullies were carved by flows of liquid water. In recent years researchers have shown that some of these gully systems are still active today, when the flow of liquid water is unlikely.
The present-day activity is likely driven by CO2 frost, which evaporates from the soil causing rock and rubble to slide down slopes. But this latest study shows that gullies were active when obliquity was higher and CO2 frost would have been sparse. And the association of gullies with ice-rich deposits strongly suggests that water carved these older gullies.
"We see similar features in Antarctica," Head said. "Despite cold air temperatures, the sun is able to heat ice just enough for melting and gully activity to occur."
This and other research pointing to relatively recent ice ages on Mars suggest the midlatitudes of Mars could be a place to look for signs of past life, Head said.
"I think people have this idea of Mars as an inactive place, that it is now as it has been for billions of years," he said. "But it seems likely that climate cycles and global climate change are still occurring."
Quelle: MD
Mars-Chroniken
« Zum vorherigen Eintrag Zum nächsten Eintrag »
2690 Views
Created with page4