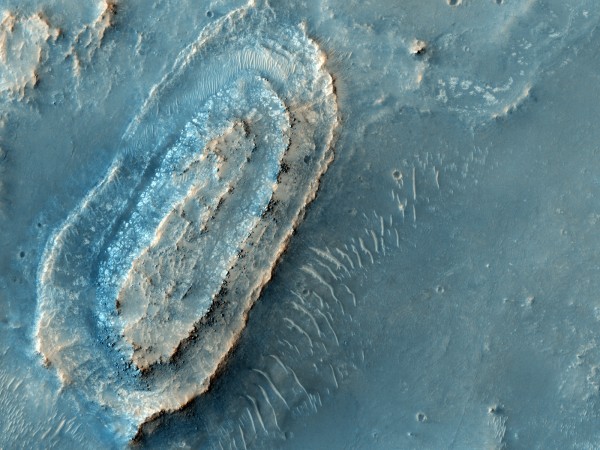 Candidate. Hydrated minerals in the 4-billion-year-old bedrock of Northeast Syrtis Major make it an attractive site for a Mars sample return mission.

ARLINGTON, VIRGINIA—This time, U.S. Mars scientists not only want rocks made with water but also rocks born in fire.

At a 3-day workshop that ended here today, planetary scientists advocated for igneous rock–bearing landing sites as high-priority targets for NASA’s next Mars rover mission, scheduled to launch in 2020. The $1.5 billion rover, a near-copy of the Curiosity rover, will collect about 30 samples of rock and soil for eventual return to Earth.

Researchers at the Mars 2020 landing site workshop stressed that their site rankings are preliminary and that other sites are still being considered. But the choices, and the discussions that led up to them, shed light on the qualities scientists are looking for in a landing site. Topping the list: diversity. The scientists want lots of different kinds of rocks—especially volcanic ones that hold clues to Mars’s geologic history. “The samples are going to be a legacy and are going to take on a life of their own,” says John Grant, a planetary scientist at the Smithsonian Institution in Washington, D.C., and co-chair of the landing site steering committee. “This has the opportunity to become much larger than this single mission.”

Of course, the search for preserved martian life from the past is still of paramount importance. Researchers spent much of the workshop discussing which watery environments would have offered the best chance to preserve biosignatures from nearly 4 billion years ago, a period in which Mars is thought to have been wetter, warmer, and more hospitable for life than it is today. But the nearly 100 planetary scientists on hand were also aware that this mission could end up as the first step in the long-sought Mars Sample Return suite of missions—and that the 2020 rover would have to gather a diverse collection of samples to justify the risk and expense of getting them home. Volcanic rocks are key, because scientists on Earth could subject them to radioisotope dating techniques to pin down a chronology for the surface of Mars. Moreover, the chemistry of these rocks would offer a glimpse into the martian mantle and the planet’s early evolution.

At the conclusion of the workshop, attendees voted informally on the nearly 30 candidate sites that researchers had presented—ranking the sites as being of high, medium, or low scientific interest. Floating to the top was a site called Northeast Syrtis Major, a terrain at the edge of the Isidis Basin, the remnant of one of Mars’s biggest and most ancient asteroid impacts. Jack Mustard, a planetary scientist at Brown University and an advocate for the site, says material from the impact could offer a precise date for that event. Scientists also want a piece of nearby lava flows, thought to have oozed out and cooled several hundred million years later.

The biopreservation potential of the Syrtis Major site is also intriguing. Orbiting satellites have already detected the signatures of carbonate, olivine, and serpentine minerals, which indicate that at one time the area hosted hydrogen-producing reactions that could have provided an energy source for microbes. In that case, the rocks, “could entomb biosignatures,” Mustard says. Mineralized fracture zones at Syrtis Major suggest that the region was at one time a hydrothermal system, with hot, fluid-filled fractures. Hydrothermal sites on Earth harbor ecosystems with extremophilic microbes.

Coming just after Syrtis Major in the informal vote were two nearby sites associated with Nili Fossae, a deep scar in the surface of Mars produced by the Isidis impact. Grant says more sites will be considered in the coming year and that no candidates will be voted “off the island” until a second workshop sometime in 2015.