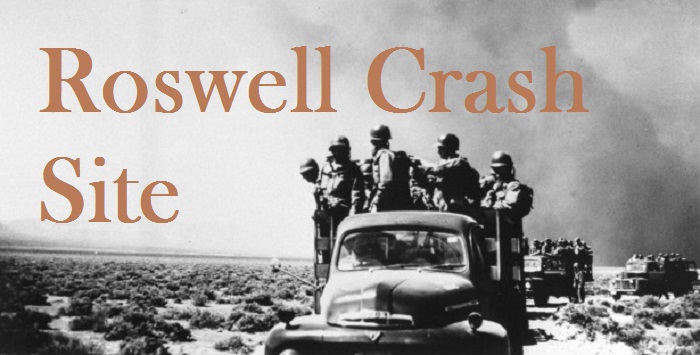 Another part of the saucer
.
Frank Kimbler has stepped forward and states that he has found a piece of debris that could have come from the Roswell crashed spaceship. In a rather interesting posting on Openminds, AlejandroRojas outlines Mr. Kimbler’s findings.
Among the items described were silver buttons that are tentatively identified as military buttons, a Landsat multi-spectral image that supposedly shows burned/disturbed ground, and a sample of debris he located that gave isotopic ratios that indicated it could not be from this earth.
As always, I am skeptical of the claim and tried to figure out if what he stated was true. The silver buttons have no military markings on them that I saw and could have come from any clothing. Calling them military without evidence is jumpingthe gun.
The Landsat image is hard to figure. There is no exif data or information of where the photograph was obtained. We don’t know the location and one has to wonder why a photograph that was taken by a satellite launched in the 1970s would show something when aerial photographs taken only a few years after the incident showed nothing. Is this a new crashed spaceship location or is it the Brazel debris field? It is hard to draw conclusions without more information and it seems that Kimbler is holding back.
Finally, we have the isotopic ratios. A scan of the report is posted with the table showing the magnesium isotopic ratios. They read:
.

Kimbler used these values to calculate a ratio of Mg-26/Mg-24 of .1365, which is less than the natural ratio of .1438. However, is this really accurate? What Kimbler apparently completely ignored in the printout is that there is a margin for error on the observed value of +/- 0.5%. That means the table really should read something like this:
.

Suddenly these ranges don’t look so unnatural.
This also means the isotopic ratio of Mg-26 to Mg-24 would be between .1294 and .1438 (and the ratio of Mg-25 to Mg-24 would be between .1206 to .1349). This range covers the normal ratios for earth as demonstrated in Kimbler’s graph. However, he just plots the one point on the graph. Instead, he should have included the margin for error.
That means his graph should look something like this (where the red encompasses the margins for error in the data):
.

The only person that I saw who publicly commented on this misrepresentation of the data was the blog UFO trail. The author of that blog, Jack Brewer, had a friend of his, Frank Purcell, look at the data. Purcell is a retired chemical engineer and he identified the problem I mentioned above. For some reason, he states the wrong value for Mg-26 (it is listed as 10.5 but the image on open-minds clearly shows 10.8). Despite this, his conclusion about the graph was, It is clear that this range does in fact intersect the line and is suggestive that the AH-1 sample is not extraterrestrial.
This appears to be a case of somebody misreading or misrepresenting the results of the analysis and there is no evidence for this being from outer space.
Former AF officer says Ramey lied BUT.....
Lee Speigel gave the headline as if some aging veteran of the 8th AF made the claim. However, it was none other than George Filer, quoting Ramey’s wife, who stated that Ramey told her that he “lied” about the weather balloon. One can easily conclude that Ramey “lied” to cover up the source of the weather balloon materials. Important to note is that Ramey’s wife is over the age of 90 (she was born in 1920). To make things more interesting, she did not marry Ramey until 1950 and Ramey died in 1963. This means that his wife married him over two years after Roswell and he died before it became a major UFO story. There was no reason for him to even tell her about the event. Exactly what part of her story can be considered accurate?
This brings us to the source of this information.
George Filer, is not what I would consider the most reliable of people. Remember when Roger Pinson of the National Institute for Discovery Science (NIDS) wrote about their investigation of Fort Dix/McGuire AFB alien shooting?
Filer had inserted himself into that story but Pinson found no evidence that the incident had occurred as described and suspected a hoax. The file is no longer
available on the internet but you can access it at http://web.archive.org/web/20071023054521/http://www.nidsci.
org/news/mcguire_contents.php
The bottom line here is that this claim of Filer’s is questionable and appears to be a lot of smoke with no fire. Both Ramey’s widow, due to her age, and Filer, due to his past record, are not what I would consider the most reliable of sources. More evidence is needed than this.
Yawn.....Nitinol.....
Anthony Bragalia revealed his latest Nitinol story. About the only thing important was that he talked to retired USAF officer Richard Weaver, who was involved in writing the 1994 USAF Roswell Report. He found Bragalia’s research interesting but it did not sway his opinion about Roswell. If Weaver had read SUNlite 1-2, 1-3, and 2-5, he would have known that Nitinol had nothing to do with Roswell. I am sure Mr. Bragalia will be entertaining us with more of his Nitinol “revelations” in the future but he has to do better than this to change my opinion.
Quelle: SUNlite 5/2011
« Zum vorherigen Eintrag Zum nächsten Eintrag »
3212 Views
Created with page4