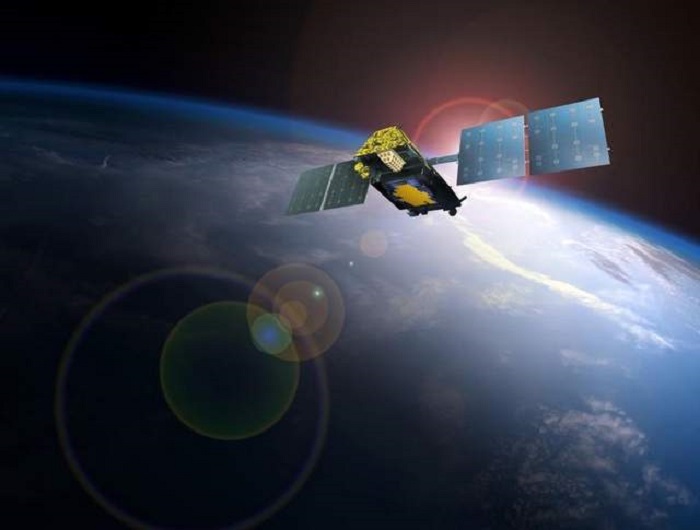 The constellation of Iridium communication satellites provides global coverage for special satellite phones. Each satellite is precisely positioned in an orbit designed to mesh with the rest of the satellites in the constellation. Even their orientation toward the Earth is carefully controlled.

Because the position and angle of a satellite can be predicted, the reflection of sunlight off the large, polished, door-sized antennae can also be closely determined. When the bouncing beam reaches the Earth, it has spread into a large spot a couple of miles in diameter.

The strongest part of the beam is in the center, with the light fading out to an indefinite edge. To get the brightest flare, you have to be stationed within one-half mile of the center of the beam.

Last week, I wrote about an Iridium flare that wasn’t the brightest. It only got about as bright as Jupiter. But this week, there is an Iridium flare that can be seen at maximum brightness at the Eastern Florida State College (EFSC) campus in Cocoa. This flare should be about 40 times brighter than the one I reported on last week. At magnitude -8, Iridium 60 will be brighter than any planet, even Venus.

The Iridium flare will occur in the large, but dim, constellation Camelopardalis, The Giraffe. It is named from the Greek words meaning camel-leopard. The flare-up occurs at 7:10 p.m. and 34 seconds. Since Camelopardalis is hard to recognize, I’ll try to describe its location using two other methods.

The first method is the horizontal coordinate system, also called the altazimuth system (from the name of the altazimuth mount for telescopes). It is based upon the observer’s local horizon and the direction of north. The first coordinate is the altitude, which is an angle measured up from the horizon toward the zenith. It is between 0 (on the horizon) and 90 degrees (at the zenith).

If you are just given the altitude, you only know that the position is on some circle parallel to the horizon.

The azimuth is the angle measured clockwise from north to the point on the horizon which is directly below the position under consideration. By clockwise, we mean that east is 90 degrees and west is 270 degrees. If you look up at the zenith, however, you have changed your orientation, and the angles seem to increase around the zenith in a counter-clockwise direction, since you are looking at it from “below.”
Tonight’s flare will be altitude 53 degrees and azimuth 20 degrees. That’s almost two-thirds of the way to the zenith (53 degrees is almost 60 degrees, which is two thirds of straight up). It is close to the NNE direction (22.5°).

So if you put your left arm pointing north, and your right arm pointing NE, your head should be about in the NNE direction. Look up two-thirds of the way to the zenith and you will be in position to see the Iridium flare. (You can lift your eyes, you don’t have to crane your neck too much.)

If you know some stars, you can find the spot another way. The point of flare-up is very nearly at the intersection of two lines in the sky. The first line rises up from Dubhe, the star at the end of the bowl of the Big Dipper. The bowl of the Big Dipper will be extending up from the NE, but the last of the seven stars is still below the horizon.

Connect Dubhe with the bright star Capella, which is nearly overhead but still in the NE direction.

Do not get distracted by Jupiter, which will be nearby but in the East direction. That is the first line, Dubhe to Capella. The second line is from Castor to Polaris. Castor and Pollux are the pair of equally bright stars near Jupiter, but lower to the E (or ENE perhaps).

It doesn’t really matter if you pick Castor or Pollux.

Polaris is the North Star, which is at the tip of the tail of Ursa Minor, or is the end of the handle of the Little Dipper.

It is, of course, in the north direction, and happens to be about the same altitude as Dubhe.

If you make a big X between those four stars, the intersection is where you can expect to see the Iridium flare. It should be visible throughout Brevard County, but the times will vary by up to 10 seconds.