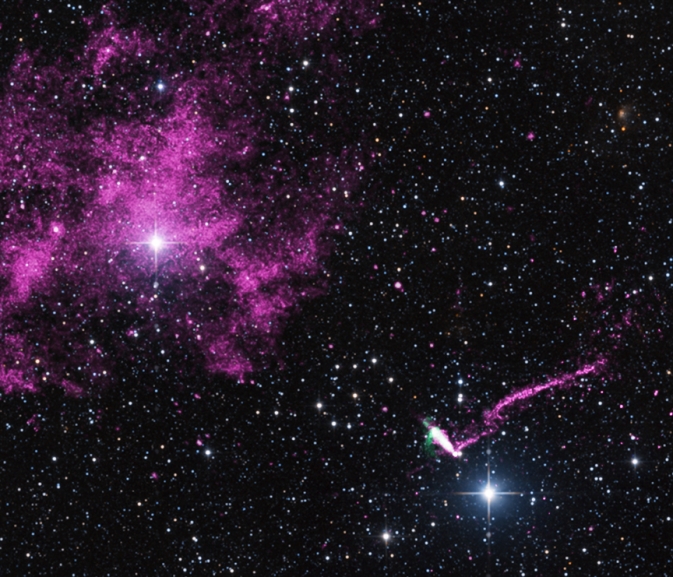 An extraordinary jet trailing behind a runaway pulsar is seen in this composite image that contains data from Chandra (purple), radio data from the ACTA (green), and optical data from the 2MASS survey (red, green, and blue). The pulsar and its tail are found in the lower right of this image.

NASA's Chandra X-ray Observatory has seen a fast-moving pulsar escaping from a supernova remnant while spewing out a record-breaking jet – the longest of any object in the Milky Way galaxy -- of high-energy particles.
The pulsar, a type of neutron star, is known as IGR J11014-6103. IGR J11014-6103's peculiar behavior can likely be traced back to its birth in the collapse and subsequent explosion of a massive star.
Originally discovered with the European Space Agency satellite INTEGRAL, the pulsar is located about 60 light-years away from the center of the supernova remnant SNR MSH 11-61A in the constellation of Carina. Its implied speed is between 2.5 million and 5 million mph, making it one of the fastest pulsars ever observed.
"We've never seen an object that moves this fast and also produces a jet," said Lucia Pavan of the University of Geneva in Switzerland and lead author of a paper published Tuesday,in the journal Astronomy and Astrophysics. "By comparison, this jet is almost 10 times longer than the distance between the sun and our nearest star."
The X-ray jet in IGR J11014-6103 is the longest known in the Milky Way galaxy. In addition to its impressive span, it has a distinct corkscrew pattern that suggests the pulsar is wobbling like a spinning top.
IGR J11014-6103 also is producing a cocoon of high-energy particles that enshrouds and trails behind it in a comet-like tail. This structure, called a pulsar wind nebula, has been observed before, but the Chandra data show the long jet and the pulsar wind nebula are almost perpendicular to one another.
"We can see  this pulsar is moving directly away from the center of the supernova remnant based on the shape and direction of the pulsar wind nebula," said co-author Pol Bordas, from the University of Tuebingen in Germany. "The question is, why is the jet pointing off in this other direction?"
Usually, the spin axis and jets of a pulsar point in the same direction as they are moving, but IGR J11014-6103's spin axis and direction of motion are almost at right angles.
"With the pulsar moving one way and the jet going another, this gives us clues that exotic physics can occur when some stars collapse," said co-author Gerd Puehlhofer also of the University of Tuebingen..
One possibility requires an extremely fast rotation speed for the iron core of the star that exploded. A problem with this scenario is that such fast speeds are not commonly expected to be achievable.
The supernova remnant that gave birth to IGR J11014-6013 is elongated from top-right to bottom-left in the image roughly in line with the jet's direction. These features and the high speed of the pulsar are hints that jets could have been an important feature of the supernova explosion that formed it.
NASA's Marshall Space Flight Center in Huntsville, Ala., manages the Chandra program for NASA's Science Mission Directorate in Washington. The Smithsonian Astrophysical Observatory in Cambridge, Mass., controls Chandra's science and flight operations.
Quelle: NASA
« Zum vorherigen Eintrag Zum nächsten Eintrag »
3204 Views
Created with page4