Saturn's auroras dance in a new video that shows the ringed planet's northern and southern lights shining in amazing, 360-degree detail.
Scientists combined observations from NASA's Cassini spacecraft with views from the Hubble Space Telescope to create the new video of auroras on Saturn unveiled today (Feb. 11). The video shows multiple views of Saturn's auroras as they appear in different wavelengths of light.
The Cassini probe, which is currently orbiting Saturn, and the Hubble Space Telescope spotted Saturn's cosmic light shows in April and May 2013. By analyzing the data, scientists found that the aurora activity was caused by the solar wind. When charged particles carried away from the sun on the solar wind slam into Saturn's atmosphere, it can cause the celestial lights to glow at the planet's poles.
. 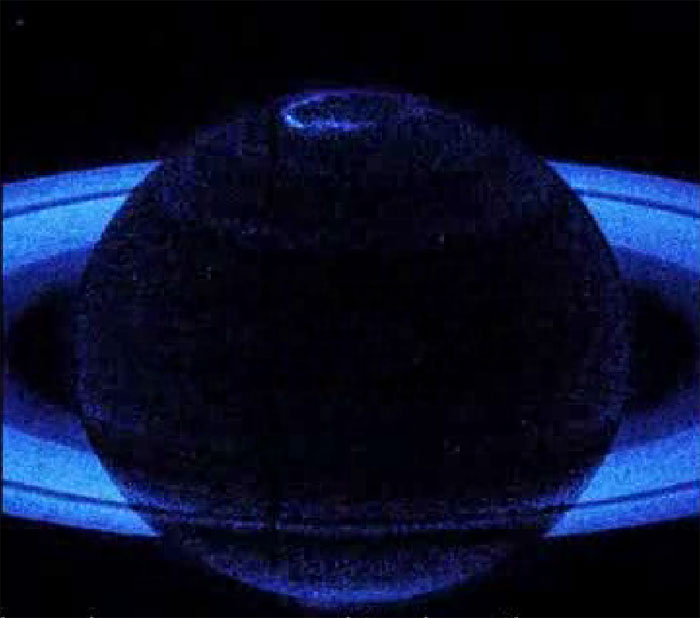 Auroras on Saturn glow like a crown in this still image from an enhanced video of Hubble Space Telescope observations taken between April and May 2013. This image has been processed to highlight the auroral activity, and was released on Feb. 11, 2014.
Credit: NASA/JPL-Caltech/University of Colorado/Central Arizona College and NASA/ESA/University of Leicester and NASA/JPL-Caltech/University of Arizona/Lancaster University
.
"Saturn's auroras can be fickle — you may see fireworks, you may see nothing," leader of the work on the Hubble images Jonathan Nichols of the University of Leicester in England, said in a statement. "In 2013, we were treated to a veritable smorgasbord of dancing auroras, from steadily shining rings to super-fast bursts of light shooting across the pole."
Saturn's northern and southern lights glow in red on the bottom and purple on top in visible light, according to Cassini photos. Earth's auroras are green on the bottom and red on top. The difference in color is due to variation in the dominant molecules of each planet's atmospheres. Nitrogen and oxygen are prevalent in Earth's auroras, while Saturn's are composed of hydrogen, NASA officials said.
The Cassini and Hubble telescope photos give scientists a new look at how the sun affects the planet's auroras and how the lights move, NASA officials said in a statement.
"Scientists have wondered why the high atmospheres of Saturn and other gas giants are heated far beyond what might normally be expected by their distance from the sun," Sarah Badman, a Cassini visual and infrared mapping spectrometer team associate at Lancaster University, England, said in a statement. "By looking at these long sequences of images taken by different instruments, we can discover where the aurora heats the atmosphere as the particles dive into it and how long the cooking occurs."
. 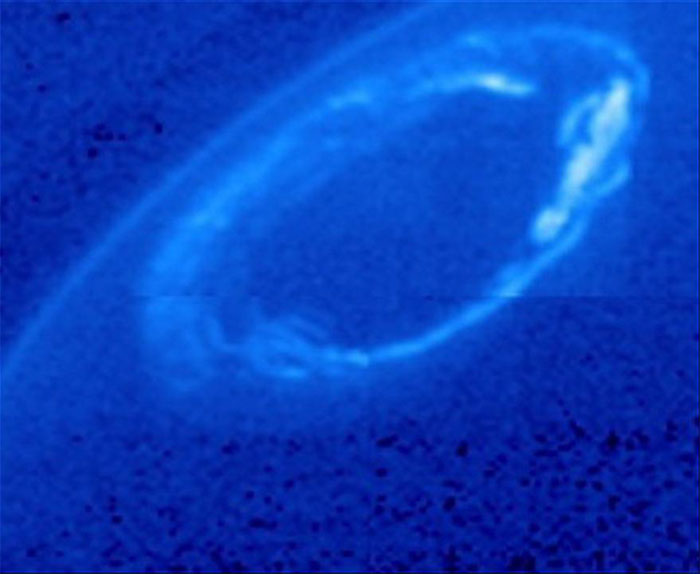 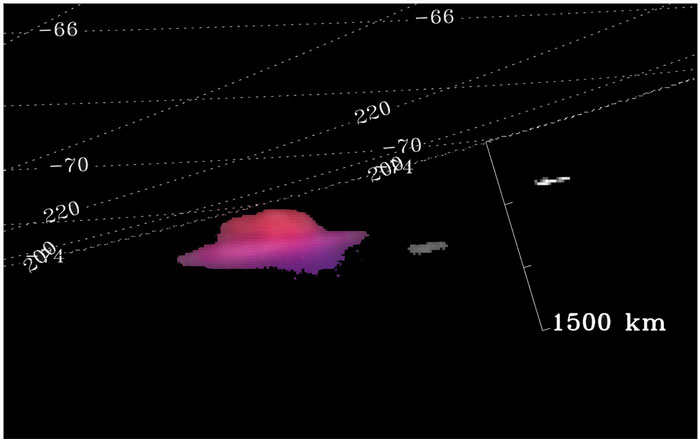 NASA's Cassini spacecraft shows curtain-like auroras at Saturn that are red at the bottom and purple at the top. This is how the auroras would look to the human eye. The height of this particular part of the aurora is about 870 miles (1,400 kilometers). This image from Cassini's imaging cameras shows particularly bright auroras on Nov. 29, 2010. Image released on Feb. 11, 2014.
Credit: NASA/JPL-Caltech/SSI
.
By analyzing the new images, scientists have also found more evidence that auroras can be created through new connections in magnetic field lines. In one part of the new video, a bright part of the aurora moves in time with the position of Saturn's moon Mimas, NASA officials said. Earlier images have also shown that a bright aurora spot could be associated with the moon Enceladus, NASA officials added.
"This is our best look yet at the rapidly changing patterns of auroral emission," Wayne Pryor, a Cassini co-investigator at Central Arizona College in Arizona, said in a statement. "Some bright spots come and go from image to image. Other bright features persist and rotate around the pole, but at a rate slower than Saturn's rotation."
Scientists are still combing through data collected during the 2013 auroras. A group of scientists are analyzing ground-based data gathered at the Keck Observatory in Hawaii and NASA's Infrared Telescope Facility to piece together an even more comprehensive view of the aurora events on Saturn between April and May of 2013, NASA officials said.
"The auroras at Saturn are some of the planet's most glamorous features – and there was no escaping NASA's paparazzi-like attention”, said Marcia Burton, a Cassini fields and particles scientist at NASA's Jet Propulsion Laboratory, Pasadena, Calif., who is helping to coordinate these observations. "As we move into the part of the 11-year solar cycle where the sun is sending out more blobs of plasma, we hope to sort out the differences between the effects of solar activity and the internal dynamics of the Saturn system."
Quelle: spacecom