X-37B Marks One Year On Orbit 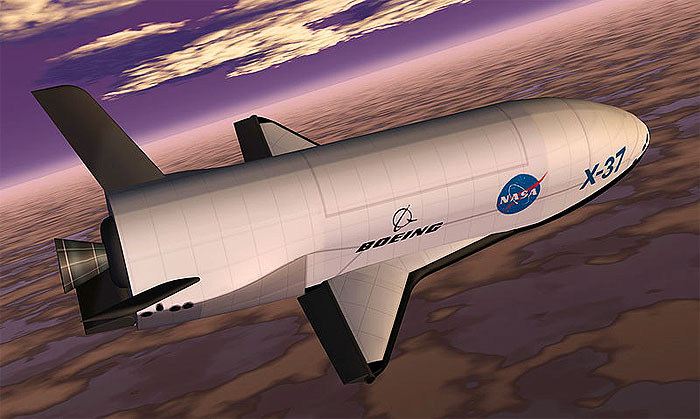 On December 11, 2013, the secretive X-37B robot spaceplane celebrates one year in orbit. This controversial spacecraft has been out of the limelight for a long time, attracting almost no media coverage for most of its mission. The third flight of one of the most secretive objects in space has been its most elusive mission to date!
What is this all about? The X-37B is a small vehicle that's roughly the size of a small truck. It has wings, tail fins and a stubby nose. There's no cockpit and no crew on board. The X-37B does have a small payload bay with clamshell doors, similar to its older cousin, the retired NASA Space Shuttle.
X-37B is launched and controlled by the US Air Force. It made its first launch in April 2010 on a mission that was largely cloaked in secrecy. 224 days later, it returned to a flawless runway landing. A second X-37B vehicle was launched in March 2011. It remained in space for 469 days.
The latest X-37B mission uses the same vehicle that was launched in 2010, making this the first time that an X-37B spacecraft has been re-used.
All of the above are known facts. We also know that the X-37B is testing new technologies that could be used in future spacecraft, such as autopilot systems and re-entry tiles. Beyond this, not much is officially revealed. The generally secretive nature of the program has generated a lot of curiosity and some fairly wild conspiracy theories.
X-37B has been accused of being an orbiting space weapon or a space-to-ground bomb. Such theories are most unlikely. There have also been suggestions that the robot shuttle is designed to retrieve or service other satellites. Buzz these theories, too.
This analyst has no inside leaks or friends behind the veil of secrecy that covers the program. However, judging from the context of other US spaceflight projects and the technical limitations of the vehicle, there is a plausible if somewhat mundane explanation for the missions.
The X-37B is probably flying two missions simultaneously. One is the testing of the X-37B itself, which has been generally acknowledged by the US Air Force.
The other concerns some secret payloads contained in the small shuttle-style cargo bay. These are probably parts intended for other satellites that are being tested in open space. They will be returned to Earth for analysis.
This analyst suspects that the most likely client for these parts is the National Reconnaissance Office, which builds and operates spy satellites. The NRO has had a string of bad luck with the performance of its satellites in recent years, and has been launching its own test missions to help develop new (and more reliable) satellites for the future. T
he X-37B offers a unique opportunity to not only launch things into space but get them back intact. Combine the goals of the USAF and the NRO, and there's enough justification for the cost of operating the X-37B program.
So the X-37B sits calmly in orbit, quietly testing its mettle against the harsh environment of space. Amateur satellite watchers who track the spacecraft have sometimes observed orbital changes, but no really strange behaviour. The Air Force says almost nothing. The NRO says nothing at all. And X-37B normally remains out of the news headlines.
When will the latest mission return? The last flight stayed in orbit for well over a year. This analyst expects that the latest mission won't end any time soon. Will it attempt to better the record set by its predecessor? We just don't know.
In the meantime, we can ponder the mysteries of this secret program and wait for it to return to Earth.
Quelle: SpaceWar