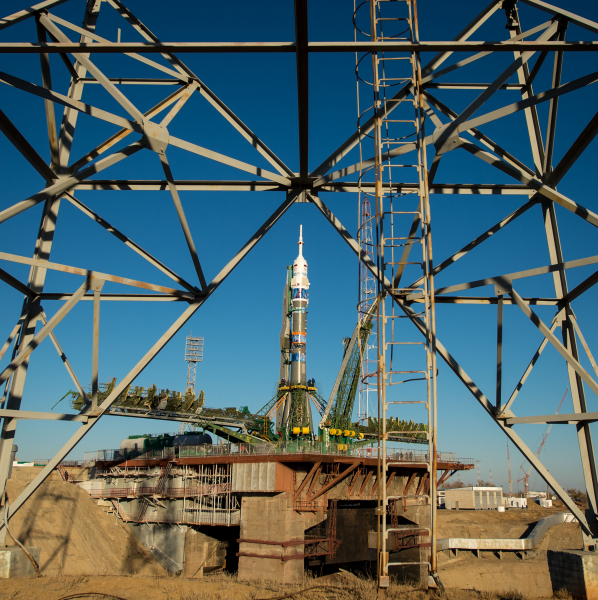 Expedition 38 Soyuz on Launch Pad
201311050030hq (5 Nov. 2013) --- The Soyuz TMA-11M rocket, adorned with the logo of the Sochi Olympic Organizing Committee and other related artwork, is seen after being erected into position at the launch pad Nov. 5, 2013, at the Baikonur Cosmodrome in Kazakhstan. Launch of the Soyuz rocket is scheduled for Nov. 7, Kazakh time, and will send Expedition 38 Soyuz Commander Mikhail Tyurin of Roscosmos, Flight Engineer Rick Mastracchio of NASA and Flight Engineer Koichi Wakata of the Japan Aerospace Exploration Agency on a six-month mission aboard the International Space Station. Photo credit: NASA/Bill Ingalls
Quelle: NASA

The Toshiba Vision screen in New York's Times Square will give the public a big-screen view of the next launch of three crew members to the International Space Station. Launch is scheduled for 11:14 p.m. EST Wednesday, Nov. 6.
NASA Television coverage, originating from the launch site at the Baikonur Cosmodrome in Kazakhstan, will broadcast on the giant outdoor screen beginning at 10:15 p.m. and continue with post-launch coverage until 11:45 p.m.
"The space station serves as a unique laboratory for researchers around the world, home to astronauts from multiple countries, and was built with international cooperation, so it's fitting to show the launch of the next crew in the most cosmopolitan city in the United States," said William Gerstenmaier, NASA's associate administrator for human exploration and operations.
NASA astronaut Rick Mastracchio, Russian Federal Space Agency (Roscosmos) Soyuz commander Mikhail Tyurin and Japan Aerospace Exploration Agency astronaut Koichi Wakata will launch in a Soyuz spacecraft. They will join six crew members already on the space station, including NASA astronauts Karen Nyberg and Mike Hopkins, the European Space Agency's Luca Parmitano, and Roscosmos' Fyodor Yurchikin, Oleg Kotov and Sergey Ryazanskiy.
This will be the first time since October 2009 that nine people have served together aboard the space station without a space shuttle being docked to the orbiting laboratory. The crew will return to its normal complement of six on Nov. 10, when Yurchikhin, Nyberg and Parmitano return to Earth.
Currently, the only transportation services to and from the space station is aboard Soyuz spacecraft. NASA is working with U.S. companies to develop and demonstrate human spaceflight systems that could ultimately lead to the availability of commercial services for both commercial and government customers from the United States.
Prominently positioned below the world-famous New Year's Eve Ball in Times Square, the Toshiba Vision dual LED screens will allow viewers to see the action from the launch pad as the Soyuz soars into the sky.
Quelle: NASA 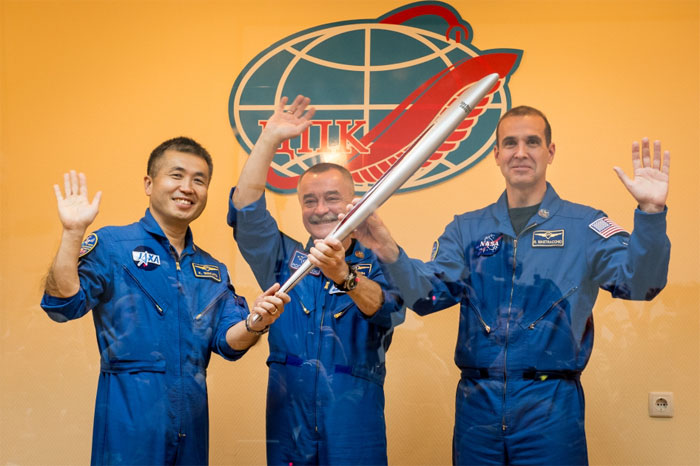 Expedition 38 Crew With Olympic Torch
Expedition 38 Flight Engineer Koichi Wakata of the Japan Aerospace Exploration Agency, left, Soyuz Commander Mikhail Tyurin of Roscosmos, and Flight Engineer Rick Mastracchio of NASA, right, smile and wave as they hold an Olympic torch that will be flown with them to the International Space Station, during a press conference held Wed., Nov. 6, at the Cosmonaut hotel in Baikonur, Kazakhstan. On Sat., Nov. 9, the Olympic torch will be carried on a spacewalk outside the space station. The torch -- which returns to Earth aboard another Soyuz on Sun., Nov. 10 with Flight Engineers Karen Nyberg and Luca Parmitano and Commander Fyodor Yurchikhin -- will light the flame at the opening of the 2014 Winter Olympic Games in Sochi, Russia.
Launch of the Soyuz rocket carrying the Expedition 38 trio is scheduled for 11:14 p.m. EST Wed., Nov. 6 (10:14 a.m. Kazakh time, Nov. 7) and will send Tyurin, Mastracchio and Wakata on a six-month mission aboard the space station.
Quelle: NASA 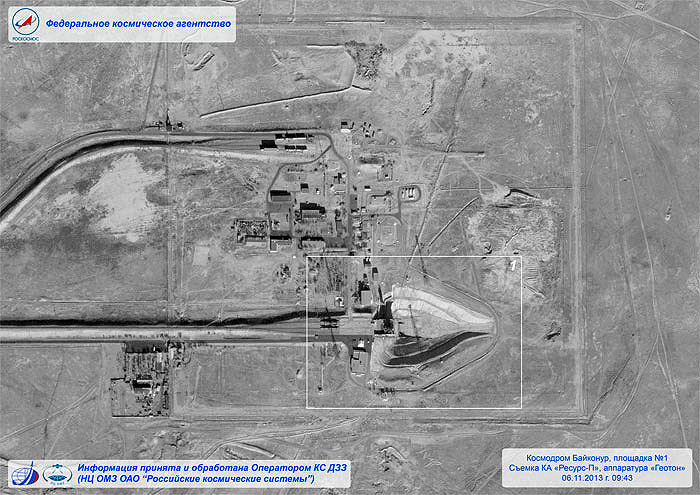 A new trio of Expedition 38 flight engineers lifted off from the Baikonur Cosmodrome, Kazakhstan, at 11:14 p.m. EST Wednesday aboard a Soyuz TMA-11M spacecraft. They are on a trip to the International Space Station that will take just over six hours.
.