A research team, led by reseacher at the National Astronomical Observatory of Japan (NAOJ), discovered that the more massive black holes tend to be located in galactic environments with higher density . This finding indicates that galaxies in a dense area often merge together, causing the growth of massive black holes.

An artist’s illustration of galaxy distribution, a host galaxy of an active galactic nucleus (AGN), and an active galactic nucleus. An AGN is a luminous compact region at the center of the galaxy, powered by the accretion of gas onto the massive black hole. This research reveals that the mass of a massive black hole at the galaxy center is related to the distribution of surrounding galaxies.
.

The research team investigated environment in which a galaxy with a massive black hole at its center exists. The team’s research extended over data for approximately 70 million galaxies, with approximately 10,000 massive black holes researched. This vast amount of data was collected through the Virtual Observatory; it connects a variety of astronomical databases around the world via the Internet, making it possible to comprehensively use the collected data. 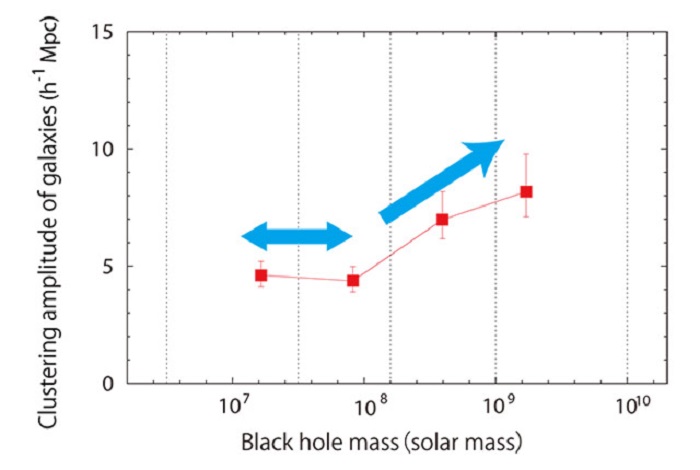