Sixty-six years after the Wright Brothers made history at Kitty Hawk, Neil Armstrong and Buzz Aldrin stepped onto the surface of the moon. From that pivotal moment on, Aldrin has advocated for continued and expanded space exploration. Now, he argues that 66 years after the Eagle landed at Tranquility Base, Americans should establish a presence on Mars.

And not just for a single trip or a moment in history. In Mission to Mars: My Vision for Space Exploration, Aldrin calls for systematic investment to establish a cycle of transportation and sustained, permanent settlements on the Red Planet. The storied astronaut talks with NPR's Neal Conan about why a presence on Mars is worth the investment.

On why space exploration is important, despite a budget-conscious political environment

"I think we're talking ourselves into this gloomsday period. What we need is leadership willing to look out into the future, and not, 'What's in it for me right now?' There's just too much of this ... groveling around, trying to get political favors for a particular district and not looking 20, 30 years into the middle of the 21st century.

"We have great opportunities in front of us, and I think we haven't done all that well in the past. And because of that, not only am I putting forth my own plan for the future, but I'm forming a foundation that should look at the evolution of space policy. Since the very beginnings of rocket travel, we've had a policy of some sort coming out of the executive branch, and then the legislative branch decides maybe how to oversee that, diddle around with it a little here or there. And in the process, they bring home the bacon to whatever constituency they represent.

"Not that that isn't a good idea. You certainly elect someone, and you expect them to do good things for the people who elected them. But if it's carried to an extreme, we are sacrificing the long-range objectives of a nation just so that somebody can keep jobs going and working on the same thing instead of new, innovative ideas that help to make us true leaders in space in the 21st century.

"There's no doubt who was a leader in space after the Apollo Program. Nobody came close to us. And our education system, in science, technology, engineering and math, was at the top of the world. It's no longer there. We're descending rather rapidly."

Why American's space exploration endeavors should be multinational

"We should've asked China to be a portion of the space station. We should've worked out ways that we can ... just give away the technology that we have that puts things up into space, with cooperation up above the atmosphere that's needed to help each other.

"We have a lot of information, a lot of things we can do without great expenditures of funds to help the other nations in their quest for prestige by putting their people on the moon. That will ... enable us to practice on the big island of Hawaii how you put things together, then do it at the moon for the other nations. Then we now know how to do it on Mars, from the moon of Mars. And when we get that done, we have a permanent base and we send people [there] with cycling orbits for permanent occupancy.

"The leader of a nation that is able to make a commitment to do that is going to go down in history for hundreds of thousands of years."

On civilian demand for space tourism

"Some people seem to think [there's sufficient interest in it]. Sir Richard Branson does — $200,000 apiece. He's got a lot of people signed up. There are other people that have progressive ways [to] do the same thing. There's an organization called Golden Spike that is going to land people on the moon.

"Now, I was very skeptical when I heard about that. What are you going to use to get there? How are you going to get there? Well ... you're not going to find that many billionaires, but if I understand what they do, they're interested in the countries that do not have a space program. They would like to have a role model that that country can afford to send to the surface of the moon. ...

"You may run out of countries that want to finance their people to go, but it's not the first business plan that has been conceived that looks like it ought to work, and sometimes it does, sometimes it doesn't. I don't see the government wanting to do that. We already did that with big rockets and landers that landed people on the moon, and we ruled space at that time."

On how to power a Mars station

"Right now, we have an emphasis — maybe an overemphasis — on photovoltaic. There's a system of solar dynamic which reflects the incoming rays of the sun on a specific point that gets very hot. We circulate fluid through that point or focal point, and we use the coldness of ... reflectors that go in the opposite direction of the sun ...

"And if I could explain it, I'm not sure I or you would understand, but it does work to produce electricity. And I believe, from what I'm told and what people who are developing these things [have said], this will become much more efficient for supplying power as long as you're in a close vicinity of the sun.

"Now, certainly Mars is 1 1/2 times further away from the sun than the Earth is. It may turn out that nuclear energy is needed. The way to get these supplies to the base on Mars is to assemble them robotically from a position close by. Now, the reason I say that is ... over 10 years ago, we had two spacecraft, Spirit and Opportunity, on opposite sides of Mars. They were supposed to last 90 days. The first one kind of stopped moving after five years, and the other one is still operating.

"Now, the program manager, Steve Squyres, of these two programs has said, ... that what those two have done in five years ... could have been done in one week if we had human intelligence in orbit around Mars." 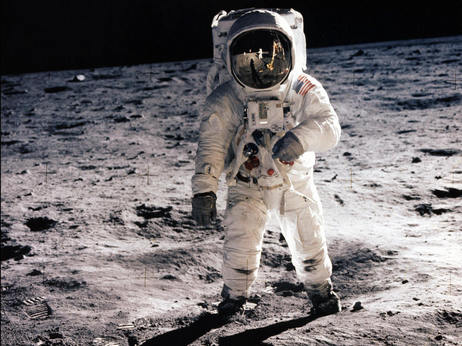 Astronaut Buzz Aldrin walks on the surface of the moon during the Apollo 11 extravehicular activity on July 20, 1969. 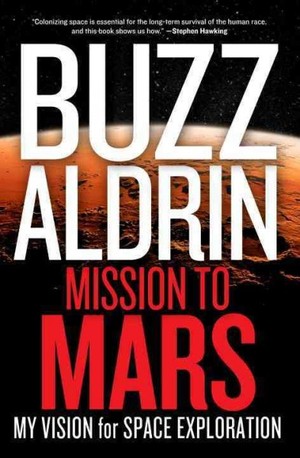