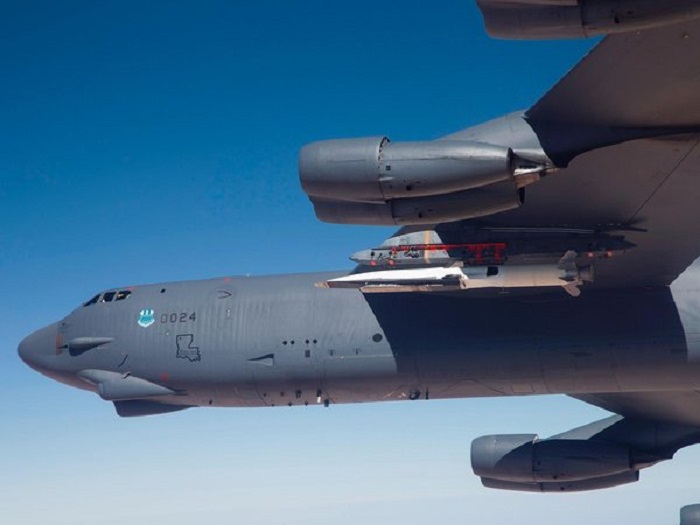 The U.S. Air Force's sleek, light-colored X-51A Waverider hypersonic vehicle can be seen tucked under the wing of a B-52H Stratofortress for this week's test launch.

The U.S. Air Force's $300 million, nine-year test program for a hypersonic plane ended on a high note this week, when the last of its X-51A Waverider vehicles made the longest flight of its kind. The success was made sweeter by the fact that it followed last year's high-profile failure.

"I believe all we have learned from the X-51A Waverider will serve as the bedrock for future hypersonics research and ultimately the practical application of hypersonic flight," Charlie Brink, X-51A program manager for the Air Force Research Laboratory Aerospace Systems Directorate, said in a news release.

The 14-foot-long (4.3-meter-long), scramjet-powered vehicle hit a top speed of Mach 5.1 during just over six minutes of flight on May 1, the Air Force said. That's the longest of the Boeing-built X-51A's four test flights, and the longest air-breathing hypersonic flight ever.

Hypersonic scramjet propulsion has been widely touted as eventually opening up the way for flights between London and New York in less than an hour. But in reality, the first application is more likely to come in the form of super-fast cruise missiles.

Scramjet is a short way of saying "supersonic combustion ramjet." There have been many efforts through the years to perfect hypersonic aircraft — that is, vehicles that travel at speeds beyond Mach 5. But the Air Force says the X-51A is unique primarily because it used hydrocarbon fuel rather than hydrogen fuel. Without any moving parts, the fuel is injected into the scramjet's combustion chamber, where it mixes with the air rushing through the chamber. The fuel is ignited in a process that's been likened to lighting a match in a hurricane.

This week's experiment followed the flight profile used for the X-51A's earlier tests: A B-52H Stratofortress took off from California's Edwards Air Force Base, flew 50,000 feet over a Pacific test range, and then released a solid rocket booster with the plane attached. When the cruiser reached Mach 4.8, the X-51A separated from the booster and lit up its scramjet engine. The scramjet exhausted its fuel in 240 seconds. The sleek vehicle coasted for another couple of minutes and splashed down into the ocean as planned. The X-51 traveled more than 230 nautical miles and yielded 370 seconds of data, the Air Force said.

"This success is the result of a lot of hard work by an incredible team.  The contributions of Boeing, Pratt and Whitney Rocketdyne, the 412th Test Wing at Edwards AFB, NASA Dryden and DARPA were all vital," Brink said.

All this is a huge improvement over the previous test, which ended in failure last August. During that flight, the X-51A veered off course less than a minute after launch and crashed, due to a problem with one of its control fins. The issue was resolved after a months-long investigation. The first X-51 test was successful in May 2010, resulting in a 200-second flight, but the second test in June 2011 was a disappointment.

There's no immediate successor to the X-51A, but the Air Force has pledged to continue with hypersonic research. It says the lessons learned during the X-51A program "will pay dividends to the High Speed Strike Weapon program" at the Air Force Research Laboratory.