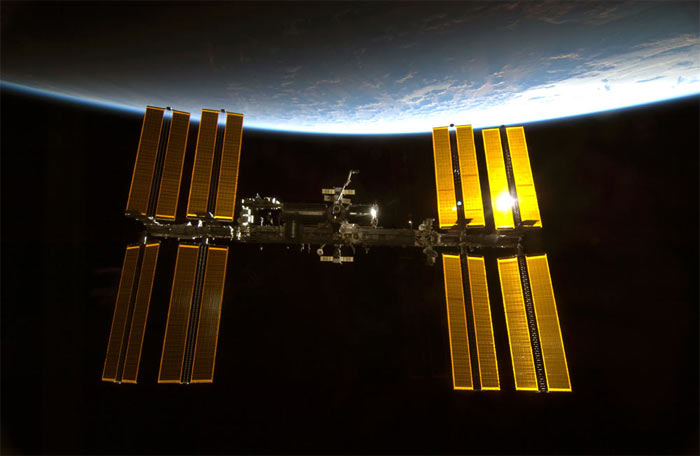 The Expedition 34 crew completed a bevy of science and maintenance tasks Tuesday despite a temporary loss of communications between the International Space Station and the ground.
Communications with the station were restored at 12:34 p.m. EST, following efforts by the onboard crew and the flight control team on the ground to correct a loss of communications that began at 9:45 a.m. Flight controllers were in the process of updating the station’s command and control software and were transitioning from the primary computer to the backup computer to complete the software load when the loss of communication occurred. Mission Control Houston was able to communicate with the crew as the space station flew over Russian ground stations before 11 a.m. and instructed the crew to connect another computer to begin the process of restoring communications. Expedition 34 Commander Kevin Ford reported that the station’s status was fine and that the crew was doing well. All systems are now back up and running as expected.
Ford spent much of his morning working with InSPACE-3, which examines colloidal fluids classified as smart materials, transitioning to a solid-like state in the presence of a magnetic field. The InSPACE-3 team believes the knowledge gleaned from this investigation may contribute to new technologies and new manufacturing processes based on the idea of having these nanoparticles act as self-assembling building blocks for larger structures.
Flight Engineer Tom Marshburn, who began his day with a blood draw to provide a snapshot of his health at this stage of his long-duration mission, collected water samples from dispensers on both the Russian and U.S. sides of the complex. He then performed microbial analysis on some of the samples and labeled the rest for return to Earth for further study.
In the station’s Quest airlock, Flight Engineer Chris Hadfield performed a routine, periodic scrubbing of the cooling loops of the U.S. spacesuits, one of a number of tasks that ensures that the suits and related spacewalk equipments remain ready for use. The next planned U.S. spacewalk is currently scheduled for the Expedition 36 crew later this year.
On the Russian side of the station, Flight Engineer Evgeny Tarelkin participated in the Relaksatsiya (“Relaxation”) Earth-observation experiment, studying chemical luminescent reactions in the Earth’s atmosphere. He and Flight Engineer Oleg Novitskiy also conducted medical examinations of the veins in their lower legs to keep Russian flight officials apprised of their health.
Novitskiy also tagged up with Flight Engineer Roman Romanenko to discuss the handover of duties aboard the station as Novitskiy, Tarelkin and Ford look toward their return to Earth aboard the Soyuz TMA-06M in mid-March.
Afterward, Romanenko unloaded some of the 2.9 tons of cargo that arrived Feb. 11 when the ISS Progress 50 cargo craft docked with the station less than six hours after its launch from the Baikonur Cosmodrome in Kazakhstan.
.
Quelle: NASA
« Zum vorherigen Eintrag Zum nächsten Eintrag »
3610 Views
Created with page4