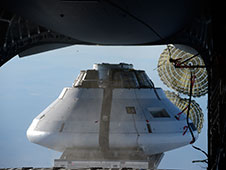 A mockup Orion capsule is poised to drop from a plane 25,000 feet above the U.S. Army Yuma Proving Ground in Arizona to test the parachute design for the spacecraft that will take humans farther than they’ve ever been before – and return them to Earth at greater speeds than ever before. Photo credit: NASA 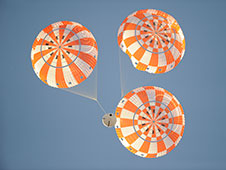 Three 300-pound main parachutes gently lower a mockup Orion capsule to the ground during a test at the U.S. Army Yuma Proving Ground in Arizona on Dec. 20. Photo credit: NASA 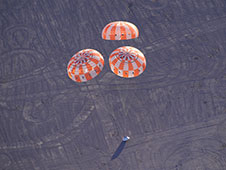 A mockup Orion capsule touches down in the desert of the U.S. Army Yuma Proving Ground in Arizona with the help of its three 300-pound main parachutes, after being dropped from an airplane 25,000 feet up. The test verified that the parachute design for the spacecraft – which will take humans farther than they’ve ever been before and return them to Earth at greater speeds than ever before – will work in the event of one of the capsule’s two drogue parachutes malfunctions.Photo credit: NASA

NASA completed the latest in a series of parachute tests for its Orion spacecraft Thursday at the U.S. Army Yuma Proving Ground in southwestern Arizona, marking another step toward a first flight test in 2014. The test verified Orion can land safely even if one of its two drogue parachutes does not open during descent.

Orion will take humans farther into space than ever before, but one of the most challenging things the multipurpose vehicle will do is bring its crew home safely. Because it will return from greater distances, Orion will reenter the Earth's atmosphere at speeds of more than 20,000 mph. After re-entry, the parachutes are all that will lower the capsule carrying astronauts back to Earth.


"The mockup vehicle landed safely in the desert and everything went as planned," said Chris Johnson, a NASA project manager for Orion's parachute assembly system. "We designed the parachute system so nothing will go wrong, but plan and test as though something will so we can make sure Orion is the safest vehicle ever to take humans to space."

To verify Orion could land safely with only one drogue parachute, engineers dropped a spacecraft mockup from a plane 25,000 feet above the Arizona desert and simulated a failure of one of the drogues. About 30 seconds into the mockup's fall, the second drogue parachute opened and slowed the mockup down enough for the three main parachutes to take over the descent.

The next Orion parachute test is scheduled for February and will simulate a failure of one of the three main parachutes.

In 2014, an uncrewed Orion spacecraft will launch from Cape Canaveral Air Force Station in Florida on Exploration Flight Test-1. The spacecraft will travel 3,600 miles above Earth's surface. This is 15 times farther than the International Space Station's orbit and farther than any spacecraft designed to carry humans has gone in more than 40 years. The main flight objective is to test Orion's heat shield performance at speeds generated during a return from deep space. 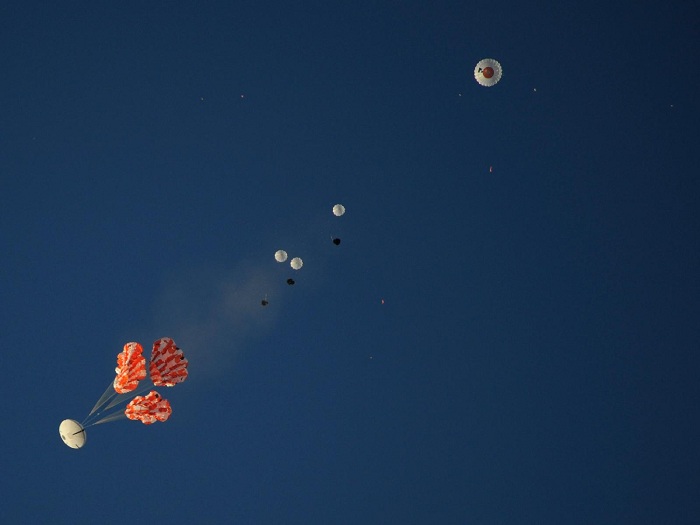