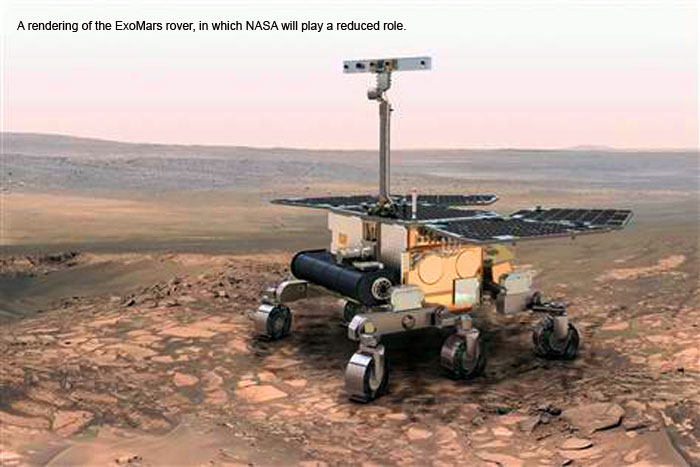 NASA has announced plans for a second Mars rover to launch in 2020, while maintaining small roles with missions planned by the European space agency. If all goes as planned, NASA hopes to put astronauts in orbit around Mars by the 2030s, per the wishes of President Obama.
The current Mars budget is $581.7 million, but back in February was set to be cut by over $200 million, according to two scientists briefed on the matter who spoke to the Associated Press. According to the AP, the European Space Agency spoke to Russia about filling the US’s vacancy in the programs, which would map sources of methane on Mars and drill into the ground for evidence of life.
In a press event at a meeting of the American Geophysical Union, NASA associate administrator for science John Grunsfeld announced that the administration will in fact play roles in the two ESA missions. NASA will provide the UHF communications systems for the 2016 mission, and in 2018 will provide a molecular analyzer for the ExoMars rover. Grunsfeld noted that the Russian space agencies will constitute a “major partnership” in both ESA-led missions.
As for the NASA-led mission to launch in 2020, Grunsfeld noted that NASA will begin work on the rover imminently, with the same team that worked on the Curiosity rover wandering Mars right now. He noted that the spare rover parts designed for the Curiosity mission would become "prime for the 2020 mission."
Looking beyond the next decade, Grunsfeld stated support for President Barack Obama’s desire to send humans to Mars. In a press release related to Grunsfeld’s announcement, NASA stated that “the 2020 mission will constitute another step toward being responsive to high-priority science goals and the president's challenge of sending humans to Mars orbit in the 2030s.”
Grunsfeld made note of budgetary concerns between allocations made by ESA versus those made by NASA, stating “these ExoMars missions are not in [ESA’s] science portfolio… at NASA we have different buckets representing the science piece.”
Part of the budgetary problem is that current programs have run over budget, including the James Webb Telescope, which was originally budgeted at $3.5 billion but is now projected for $8 billion. The Mars science laboratory also ran over to $2.5 billion from its original projected cost of $1.5 billion. The press release notes that the 2020 mission fits within the five-year budget plan in Obama’s 2013 budget, and is “contingent on future appropriations.”
-
Quelle: NASA
-
Mars is ours for the forseeable future, NASA announced Tuesday with plans for a "robust" multi-year program that includes a 2020 launch date for a new robotic science rover.
With over-the-moon elation, the space agency reinforced its commitment to a Mars exploration program that meets "our nation's scientific and human exploration objectives," according to the official news release.
"The Obama administration is committed to a robust Mars exploration program," NASA Administrator Charles Bolden said. "With this next mission, we're ensuring America remains the world leader in the exploration of the Red Planet, while taking another significant step toward sending humans there in the 2030s."
The "planned portfolio" includes:
Curiosity and Opportunity rovers
Two NASA spacecraft
Contributions to one European spacecraft currently orbiting Mars
2013 launch of the Mars Atmosphere and Volatile EvolutioN (MAVEN) orbiter to study the Martian upper atmosphere
Interior Exploration using Seismic Investigations, Geodesy and Heat Transport (InSight) mission, which will take the first look into the deep interior of Mars
Participation in ESA's 2016 and 2018 ExoMars missions, including providing "Electra" telecommunication radios to ESA's 2016 mission and a critical element of the premier astrobiology instrument on the 2018 ExoMars rover
To help keep mission costs and mission risks as low as possible, NASA/JPL's development and design of the future rover will be "based on the Mars Science Laboratory (MSL) architecture" that successfully sent Curiosity to the Martian surface last summer.
Says John Grunsfeld, NASA's associate administrator for science (and astronaut), of the Mars Exploration Program restructuring:
"The challenge to restructure the Mars Exploration Program has turned from the seven minutes of terror for the Curiosity landing to the start of seven years of innovation...This mission concept fits within the current and projected Mars exploration budget, builds on the exciting discoveries of Curiosity, and takes advantage of a favorable launch opportunity."
On Monday, inconclusive findings from the first scoop of Martian soil collected by the NASA's Curiosity rover were reported at the AGU meeting in San Francisco. On Tuesday, scientists said  that the Opportunity rover had uncovered hints of clay along the Endeavour crater.
Quelle: 89.3KPCC
« Zum vorherigen Eintrag Zum nächsten Eintrag »
4266 Views
Created with page4