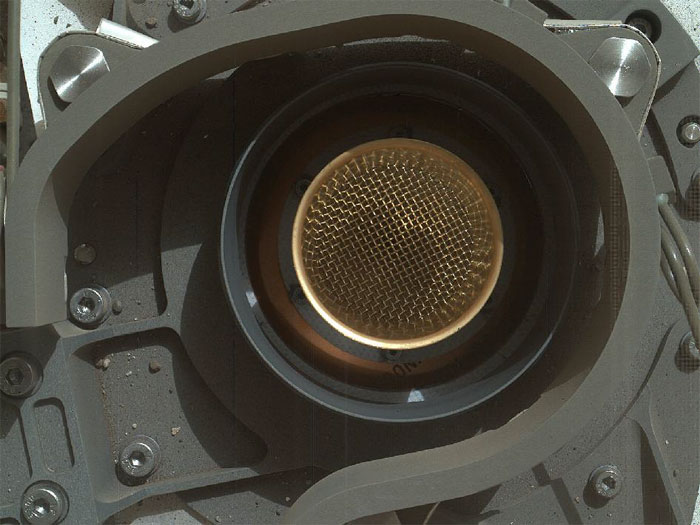 Say 'Ahh' on Mars
This image from NASA's Curiosity rover shows the open inlet where powered rock and soil samples will be funneled down for analysis. It was taken by the Mars Hand Lens Imager (MAHLI) on Curiosity's 36th Martian day, or sol, of operations on Mars (Sept. 11, 2012). MAHLI was about 8 inches (20 centimeters) away from the mouth of the Chemistry and Mineralogy (CheMin) instrument when it took the picture. The entrance of the funnel is about 1.4 inches (3.5 centimeters) in diameter. The mesh screen is about 2.3 inches (5.9 centimeters) deep. The mesh size is 0.04 inches (1 millimeter). Once the samples have gone down the funnel, CheMin will be shooting X-rays at the samples to identify and quantify the minerals.
Engineers and scientists use images like these to check out Curiosity's instruments. This image is a composite of eight MAHLI pictures acquired at different focus positions and merged onboard the instrument before transmission to Earth; this is the first time the MAHLI performed this technique since arriving at Curiosity's field site inside Gale Crater. The image also shows angular and rounded pebbles and sand that were deposited on the rover deck during landing on Aug. 5, 2012 PDT (Aug. 6, 2012 EDT).
- 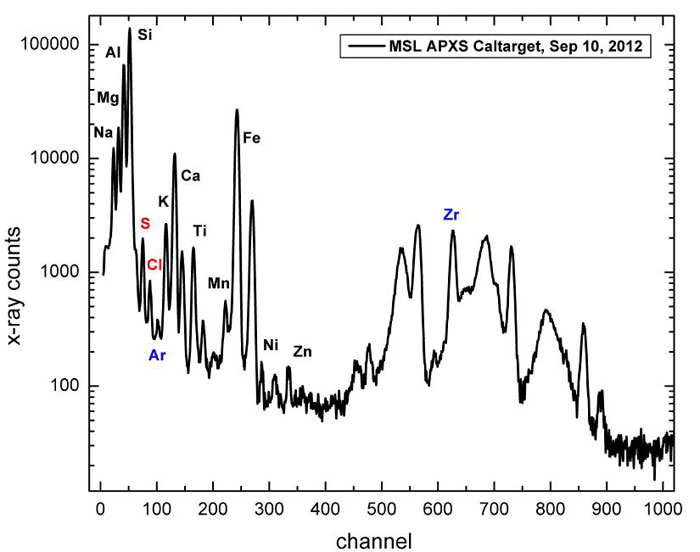 This graphic from NASA's Curiosity rover shows data obtained by the Alpha Particle X-Ray Spectrometer (APXS) from its calibration target on the 34th Martian day, or sol, of operations (Sept. 10, 2012). The graphic shows the number of counts registered in the various X-ray energy channels. Each element emits a characteristic energy, providing a signature that reveals the abundance of the element in the samples on the calibration target.

APXS, which is on Curiosity's robotic arm, analyzes chemical elements in rocks and soils. The APXS calibration target is a slab of well-characterized basaltic rock surrounded by a nickel plate. The samples were brought from Earth to compare the APXS reading in the lab prior to launch with those taken after landing on Mars. This allows scientists to monitor and to correct for any changes in the characteristics over the duration of the mission

The graph shows peaks indicating elements detected mainly from the rock slab (labeled in black) and the Martian atmosphere and the instrument itself (labeled in blue). The instrument also detected additional elements that can only belong to grains of Martian soil that were deposited onto the calibration target likely during the landing (labeled in red).

This test took place at night and the instrument performed well, confirming the pre-launch tests. Additional data were acquired around noon and in the afternoon, showing that very good performance can be achieved even during the Martian day.

Opening and Closing SAM
This set of images from NASA's Curiosity rover shows the inlet covers for the Sample Analysis at Mars instrument opening and closing, as the rover continues to check out its instruments in the first phase after landing. These images were taken by the Navigation camera on the 36th Martian day, or sol, of the rover's operations on Mars (Sept. 11, 2012). The rover's mast is casting a shadow over the deck.
Image credit: NASA/JPL-Caltech
-
Mars Rover Curiosity Finishing Arm Tests
12.09.2012
The team operating NASA's Mars rover Curiosity is planning to resume driving the rover this week after it finishes a week of tests of the rover's arm. As Curiosity drives, it will use its cameras to find a rock to touch and examine with tools on the arm.
Spectrometer Finishes Calibration-Target Reading
11.09.2012
On Sol 35 of its mission on Mars (Sept. 10, 2012) Curiosity continued activities for characterizing its arm and the tools on the arm. The Alpha Particle X-Ray Spectrometer (APXS) completed a reading of the chemical ingredients in the instrument's calibration target. Then the arm moved the spectrometer away from the target and maneuvered to the arm's "ready out" position (http://www.nasa.gov/mission_pages/msl/multimedia/pia16147.html). The Dynamic Albedo of Neutrons (DAN) instrument, mounted near the rear of the rover, was given commands for a nearly six-hour reading after the Mars-afternoon communications pass by NASA's Mars Odyssey orbiter. DAN is used to check whether the ground under the rover holds hydrated minerals, which have water molecules or water-related ions bound into the mineral's crystalline structure.
Curiosity continues to work in good health. Sol 35, in Mars local mean solar time at Gale Crater, ended at 6:35 a.m. Sept. 11, PDT.
3700 Views
Created with page4